A HUD is a Heads-Up Display: a transparent display that presents data without requiring users to look away from their usual viewpoints. The origin of the name stems from a pilot being able to view information with the head positioned "up" and looking forward, instead of angled down looking at lower instruments. A HUD also has the advantage that the pilot's eyes do not need to refocus to view the outside after looking at the optically nearer instruments First developed in the 1940s for military aircraft (from Wikipedia).

As the newer versions of Oolite have allowed more flexibility with modifying HUD elements since the early days of Oolite v.1.20 in 2004! From the halcyon days of Aegidian's hand-crafted Mega-Walnut dashboard (for the luxurious Fer-de-Lance), the HUD designers have risen to the challenge. There was a quantum leap under Cim's tenure as lead designer, when it was made easier to code new HUDs and the range of possibilities was greatly increased. This extended to MFDs. This happened with the release of Oolite v.1.79 in 2013/4.

Standard "vanilla game" HUD (key is below). A more interactive guide to this is available through the in-game Tutorial

Shows the effective charge in the twin Zieman deflector shields. These shields absorb energy by reflecting it with an equivalent charge of inverse energy. There are two generators for these shields, one forward and aft.

From top to bottom:

These indicators show the type and status of weapons attached to the external pylons of your ship. There are three types of armament that can be mounted, and these are distinguished by different icons on the HUD:

When shown with a yellow outline, the highlighted weapon is armed and ready to launch.

To arm a missile, hit t on your console. To disarm, press u, or switch back to ID mode by pressing r. To fire, press m.

A Multi-Targeting System may be purchased and installed, to select several simultaneous targets.

For a guide to OXP pylon indicators see Category:Missiles & Bombs

When this S is displayed, the ship is within the control zone of a space station, inside its protective Aegis. Any pirate activity detected within this zone will be met by immediate response from members of the Galactic Police.

This pulsating lamp shows the status of your ship. If it is green, the radar is clear, and the Torus Jump Drive may be activated. If it is yellow, there are other vessels or powered objects in the nearby vicinity, and the Jump Drive is inhibited. If it is red, there is a danger to your ship: a hostile may have target-locked your ship, your energy reserves may be very low, you may be at too low an altitude, or your cabin temperature may be approaching a dangerous level.

The scanner is the pilot’s overview of the world outside, and is a protected design, patented by Brell and Baben in 3084, running the IFF system on a 3D representation of space in a 10 km radius of the ship.

The three dimensions are represented via an elliptical display showing the horizontal plane plus the use of ‘tails’ on each scanner blip to indicate the vertical position in relation to the scanning ship’s position. To make further use of this tool, see 8, Scanner Zoom Factor.

Displays the current date and time in galactic meanTime, the standard notation for recording time in space. It is used because it does not rely on point of reference like planetary rotations. Upon exiting witchspace, the clock will temporarily enter update mode to synchronise with the local time signal as broadcast by all witchspace beacons. This is necessary due to the small amount of relative time distortion experienced during witchspace transit.

There are two space compasses available for your HUD. Your ship is fitted with the basic version. It tracks a single object, intelligently choosing which would be the more relevant. Upon entry to a system it will automatically track the location of the nearby planet.

When the world's space station is detected, the compass will track that instead. The Advanced Space Compass may be purchased to offer further options.

The speed indicator show s the ship's relative velocity through space using the System drive. Through advanced AI and engineering technology, much of the hard work of space flight has been removed from the pilot and made the speciality of the flight computers on board the ship. This means that a simple relative speed indicator is all that is needed to calculate the ship's speed in relation to the major bodies of the system.

A simple control method will increase and decrease the ship's movement from a standstill to speeds in excess of 0.3 light Mach. Use the w and s controls on your console to increase or decrease your speed respectively.

These scales show the ship's roll rate about the axis of travel (the central dot will move to the right of centre when the ship is rolling clockwise, to the left if counterclockwise), and the thrust levels in the vertical axis (the central dot will move left when in a dive attitude, and right when climbing). These are useful when calibrating directional controls following a systems upgrade or an avionics failure.

These bars show the amount of energy stored in the solar capacitors. They are used primarily to power the ship's systems, including the structural integrity field, life support system and lasers, as well as auxiliary systems such as cargo loading systems and communications. Ships can have between 2 and 7 capacitors, and energy will drain from them in numerical order as the ship takes damage. Hull damage will reduce these levels as the autoRepair systems seal hull breaches. If the last energy cell is depleted, the hull's damage will cease to be sealed and the structural integrity field will collapse, normally resulting in explosion with the final laser hit.

These cells will recharge using solar energy when the ship is in cruise mode.

An Extra Energy Unit is available for purchase which will improve the recharge rate of the energy cells.

This icon, only visible when Fuel Scoops are fitted, is located between the Forward Shield Strength indicator and the Short-range Scanner on the Cobra Mark III. The Fuel Scoops Status Indicator has the twin function of indicating when the Fuel Scoops are in operation and also when the Cargo Bay is filled to capacity. 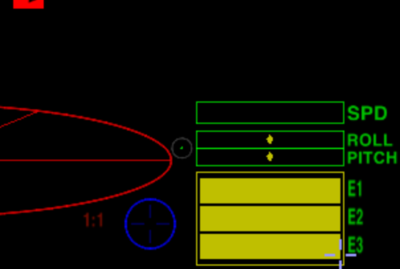 It is also possible to instead use splines for your joystick axes. 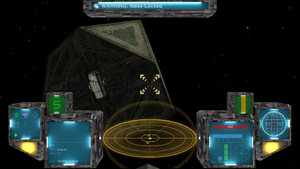 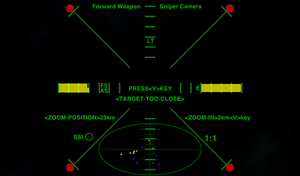 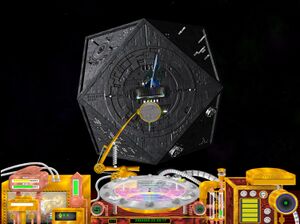