A chain reaction bomb, available in the Vanilla game. 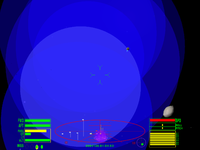 The Q-bomb is carried on a standard missile mounting point.

Select the Q-bomb like any other missile (t). It does not need to be fixed on any particular target (and cannot be targeted). Release it like a normal missile (m). Be sure to drop it as close to the centre of any action you wish to see an end to. And be sure to scarper, immediately!