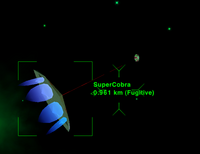 A SuperCobra attacks a Thargoid warship

The SuperCobra is the newest in the range of Cobra ships from Cowell & MgRath Shipyards of Lave. Intended as a follow-up to the enormously successful Cobra Mk.3, the ship is larger and faster with a stronger hull, with the ability to carry military shield enhancements and shield energy boosters. It exemplifies the latest generation of small multi-role ships that can be used for trading, military purposes, bounty hunting (and to the dismay of the Police, piracy).

The ship is most notable for being the Cobra Mk.3 replacement - and basically looks like a Cobra Mk.3, the differences only becoming obvious when the two ships are together, or when the SuperCobra lights up its engines trailing four bright plumes instead of two. Although its predecessor is still popular, most ship afficionados considered the Cobra range to be getting long in the tooth, and even becoming outclassed in most respects by newer designs such as the Python Class Cruiser. With 'What Spaceship' recommending the somewhat large and unweildy PCC over the Cobra Mk.3 in a recent issue, CMR shipyards decided to expedite bringing the SuperCobra design to market.

Few of the ships have been seen in trader's hands; the increases in size and speed have made this a very expensive ship to buy. However, the ability to fit military shield enhancements and at the same time, fit shield boosters, have made this craft extremely attractive to well-heeled bounty hunters and pirates alike. Pirates in particular like the cavernous cargo area - extendable to 55 TC - and lone marauding SuperCobras have been spotted in the more dangerous systems. Bounty hunters have also discovered the advantages of a large cargo area as pirates will often spill copious quantities of loot - and bounty hunters returning with the cargo the pirate stole is no longer an uncommon sight (blurring even more the difference between a pirate and a bounty hunter). The ship is also used quite often by traders with not so legitimate cargo like firearms or narcotics.

The ship is universally liked by those who have flown one - it is one of the most manoeuvrable ships in its size class, as well as having a good turn of speed. The addition of witch space fuel injectors make the ship a courier's dream.

The first prototype SuperCobra was flown in 3138, in an abortive coup to attack the capital of the Duval Empire at Achenar. The identities of the crew are restricted under the Galactic Cooperative Official Secrets Act. While destroyed, it proved itself in battle against an Imperial Courier, as told in Status Quo. It is not known if the crew perished with the ship's destruction.

This ship is currently found inside the Random Hits oxp.

Any original threads will have been lost in the Great Deletion - but see here: Info request.... SuperCobra (2006)