This page collects the zillions of different varieties of missiles & bombs.

Armoury by Thargoid
Maegil's Missiles by Cmdr. Maegil (old, 2007, still an oxp).
Missiles and Bombs also by Ramirez
On the other hand, the über-missiles & mines from the Killit OXP (Superweapon, MegaWeapon, UberWeapon etc) have been omitted as they were never intended for serious play - but rather to make a point about Cheating.

Remove Individual Pylon OXP allows you to swap one missile for another (without needing to sell everything you have - and then finding that the TL is too low to buy everything back)!

Anti-Missile System (AMS Darts) (from Armoury) - note that the Vimana HUD has an AMS dart counter
Chaff (from Missiles and Bombs)
Defence Mine (from Missiles and Bombs)
Missile Rack (from Armoury)
Missile Spoof - a flare-based distraction for Hardheads
Quirium Cascade Mine Detector - and Target System Plugins warn of the release of Cascade Mines to allow a fast escape! 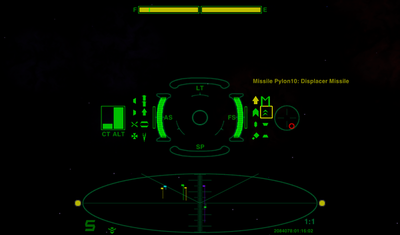 Missile Analyser tells you about oncoming missiles
ChupacabraHUD lists your own

The following 70 pages are in this category, out of 70 total.