This OXP adds some local missions to the Bulletin Board System, to hopefully add more things to do in and around each system. Very little by way of new ships, stations, equipment or AI's has been added to the game. The idea was to simply make use of the existing assets in new and (hopefully) interesting ways.

There are a number of different missions available, and the availability of these missions depends on a number of factors (score, system tech level, government type, installed equipment etc). Missions can be offered in a number of ways: via the Bulletin Board, from scooped escape pods, from passing ships, or from emails.

This OXP also includes the concept of "mission chains", in that completing one mission may trigger a second mission, which could then trigger a third mission, and so on. Sometimes the player is given an option as to whether they want to perform the secondary mission, and sometimes they won't be.

Generally, all the missions are optional. If you don't visit the Bulletin board, you won't see what's on offer, and very little in the game will change if you don't do the missions. You may occasionally be offered a mission when scooping escape capsules, and sometimes passing ships will pass on requests. Also, one of the coded events that can occur in your current chart will make particular systems difficult to enter for a period of time.

Notes about missions: Some of the missions in this pack can impact on other areas of the game. For instance, one type of mission, if completed successfully, will result in a higher frequency of mis-jumps to a particular system. Some missions can effect the commodities of a station, or the availability of equipment at a station. It will hopefully be obvious when these changes take place (ie as a result of completing a mission).

This mission pack contains over 60 different missions and variations, but most of the missions fall into one of these general categories.

Fuel/Cargo scoops and the Advanced Space Compass are required for many of the missions. If your ship lacks these items, certain missions will be unavailable.

Broadcast Comms MFD is a requirement for many of the missions, as it provides an interface for ship-to-ship communications. If you have not purchased this item, some of the missions will be unavailable.

Some new equipment has been added with this OXP. 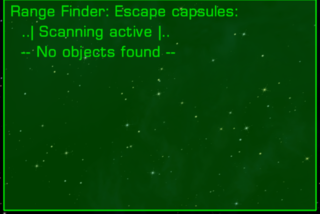 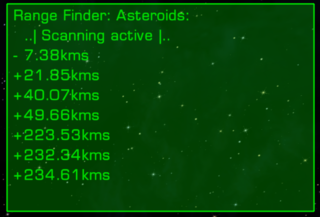 When this item is purchased, installed and primed, you can press the "b" key (Mode) to switch the mode between escape capsules, black boxes, asteroids, ships, communication relays and cargo pods. Pressing the "n" (Activate) key will initiate a scan of the local area, up to a distance of 200km. The scan will take approximately 2 seconds to run, but will be run continuously until deactivated with the "n" key again. Any objects of the selected type within range will be displayed, along with the distance to the object. A "+" or "-" indicator will be displayed next to each item, showing whether you are moving away from, or towards, the target. Beyond this, the range finder does not provide directional information.

The information returned by the scan is displayed in an MFD, so you will need to select an MFD slot (using the ":" key) and then select the Range Finder MFD (using the ";" key).

An additional device, a Range Finder Extender, can increase the range of the scanner to 500km.

This device will be issued to the player when attempting particular missions, although it can also be purchased independently from TL3 systems for 60cr. It is a primable piece of equipment that will communicate with any communication relays in the system and request the beacon to be switched on for a short period of time. The device can be used 3 times before needing to be recharged. Using the device will incur a 5% penalty on whatever mission the communication relay relates to.

This item will replace all the degraded parts of the switch, allowing it to be used 3 more times. The cost will vary, based on how degraded the current parts are. It is available in all systems.

This device attaches to the end of the cargo scoop, and when engaged, will apply some force to any ejected item so that it will slow to a stop within a short period of time, rather than floating away at a constant rate.

Once purchased, the unit must be turned on before any cargo will be impacted. Prime the "Ejection Damper" equipment, and press either the "Mode" (b) or "Activate" (n) key to turn the unit on. Pressing those keys a second time will turn the unit off. The unit is automatically turned off whenever your ship docks.

When the unit is on, all cargo ejected will be slowed to a stop. The device can be used on 50 ejected items before it needs to be replaced.

The following OXP's are listed as required:

The following OXP's are listed as recommended, in that additional text and/or gameplay options will become available if they are installed.

What else is in the box?

Reputations: The missions available to the player originate from a number of different entities - governments, corporations, factions of every stripe. As missions are performed for these entities your reputation will increase. However, given the number of entities involved, a new F4 interface screen has been created that combines all reputation information into an easy to read display. Also, any awards received can be displayed as well.

If you have the Library OXP installed, you additionally have the option of importing a variety of internal and OXP reputations into the screen, rather than having those reputations displayed on the F5F5 Manifest screen.

Thanks to Svengali and Disembodied for their PhraseGen tool.
Thanks to Ramirez for his remote mine model (from the "Missiles and Bombs" OXP).
Thanks to these forum members who have submitted bug reports or suggestions that have helped make the OXP better: Nite Owl, herodotus, Astrobe, Damocles Edge, Cody, Bogatyr, pagroove, gsagostinho, Cmd. Northgate, Balisongdalo, javirodriguez, and lohcek.gsagostinho, Cmd. Northgate, Balisongdalo, javirodriguez, and lohcek.
Special thanks to cim who has very kindly given permission to include his "Black Box" model from Rescue Stations in this OXP.

This OXP is discussed at this forum link: http://aegidian.org/bb/viewtopic.php?f=4&t=18745