Witchdrive Fuel Injectors have one function: to make your ship go very very fast almost instantaneously. They do not boost you to the speed of your ship's hyperspeed, and unlike the hyperspeed, they continuously burn fuel to augment your inertialess prime mover. Although they are not as fast as the intra-system hyperspeed/Torus Drive, they cannot be mass locked.

They thus add a fourth method of propulsion for your Cobra Mk.III (combining with the regular engine drives, the hyperspeed/Torus drive and the hyperspace/witchspace jump drive).

Witch fuel injectors are possibly one of the most versatile enhancements you can fit to your ship.

You must bear in mind that the injectors require witch space fuel (Quirium) - and this comes from the same tank as your hyperdrive's supply. If you hyperspace to a system at the edge of your ship's range, you will have little fuel to use with the witch space fuel injectors. If you are intending to get into situations where it becomes necessary to use the injectors frequently, it is a good idea to plan hyperspace jumps to leave plenty of fuel for usage in the injectors. Typically, a third of a tank of fuel will last long enough for most purposes. 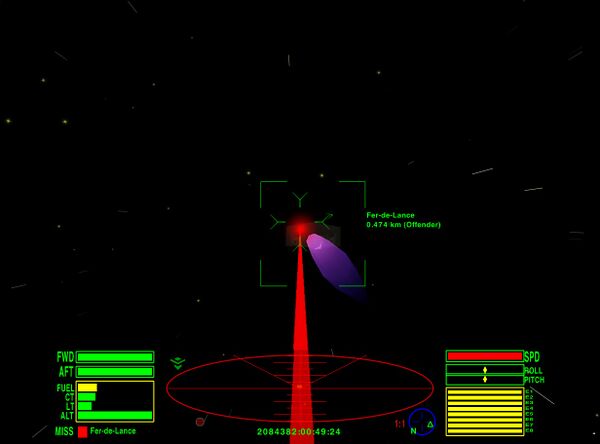 Fer-de-Lance will not escape - even with Witchdrive Fuel Injectors (note the purple "exhaust").

Witch Fuel Injectors were developed by Prosset Drive Systems. They used a fleet of Cobra Mk.1 ships to prototype and refine their new injector system, which gave a great boost to the craft's speed. The company chose the Cobra Mk.1 because it was simple to modify the engine bay to accommodate experimental equipment, where to do so in other ships would have involved major structural changes.

The issue with injectors is that they quickly run out of fuel, leaving one at the mercy of the ravenous hordes of the unwashed. The following OXPs may be worth perusing.