Capt. Murphy is a relative newcomer to the Ooniverse. He briefly visited back in the 1.65 days, before moving in permanently shortly after 1.75 was released. However he did spend many months/years as a youngster playing Elite on the Acorn Electron (no missions, 1 Galaxy, about 6 different ships) and the Amstrad CPC, and as an adult Elite TNK on his PC.

In between times he has mainly been stranded on Saturn's moon Titan in the game Hardwar where as smurph he helped make some mods for that game.

Capt. Murphy is currently flying a rather battered Cobra Mk III known as 'Murphy's Law' in Galaxy 5 and is has recently attained the rank of Deadly. He is a bit of a jack of all trades, but mainly engages in Bounty Hunting, Narcotics Smuggling, trade in Gems and Precious Metals and Escorting NPC Traders. 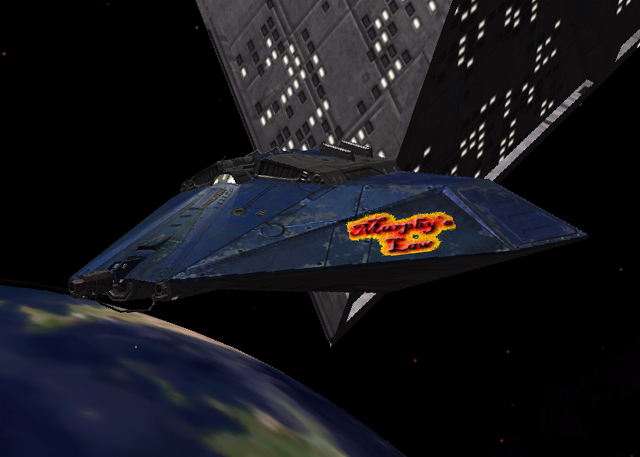 Capt. Murphy can't help but tinker underneath the hood, and often parks his Cobra for days whilst trying to reprogram it's computer. He has as a result produced (with a fair bit of help from more experienced OXP makers) the following OXPs for Oolite 1.76 and above.

Breakable_'Standard'_Equipment_OXPs are a series of OXP's that make some of a ships 'standard' equipment such as the HUD/Scanner, Witchspace Drive, Torus Drive, System Drive, Core Energy Unit and Primary Shield Generators damageable in combat. Damaged equipment has reduced functionality until repaired in the normal way.

Escape_Pod_Locator_OXP is an equipment upgrade that alerts the player to escape capsule launches in the same system and marks escape pods with custom scanner colours and a beacon code on the Advanced Space Compass. Also introduces NPC Search and Rescue ships that search and scoop escape pods.

Escort_Contracts_OXP allows the player to enter into short term contracts as a paid escort to lone-wolf NPC traders. Requires Oolite 1.76 or above.

Explorers'_Club_OXP records unique systems visited and displays the count of the systems visited for the current galaxy and whole Ooniverse on the manifest screen. Also includes options to keep an automatic photographic record of your explorations, see lists of systems visited and not visited so far, and set the long range chart to show this information graphically. It includes an Explorer ranking system and some special exploration achievements. Requires Oolite 1.76 or above.

Illegal_Goods_Tweak_OXP introduces interaction with Galcop customs when docking at a main station with contraband in the hold. Also includes potential reward missions if Slaves are voluntarily handed over (released) to customs. Requires Oolite 1.76 or above.

Police_IFF_Scanner_Upgrade is an equipment upgrade that highlights ships with an offender or fugitive status in custom colours on the IFF Scanner.

EnergyBombfor1.77.oxp reverses the changes made in Oolite 1.77 that make the Energy Bomb available only in "Strict play" mode. This was the first of a range of versions by others such as Another commander & Cim.

Extended Shipyards adds additional options at the shipyard including ability to takes ships on test flight, hire ships and buy a new ship whilst retaining your current ship in storage. Dependent on Ship Storage Helper below

Ship Storage Helper is a helper OXP that includes functions to facilitate saving and retrieving stored ship attributes. Used by OXPs such as Extended_Shipyards.oxp.