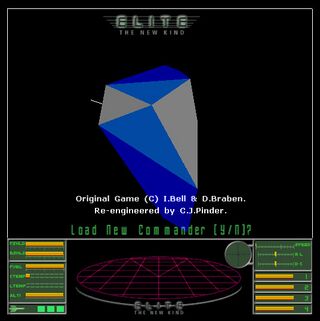 Elite was a highly successful space combat/trading game written by Ian Bell and David Braben. It was originally released in 1984 on the BBC Micro Computer. Between the years 1999 and 2002 Christian Pinder wrote a remake of Elite known as Elite – The New Kind (E-TNK).

E-TNK became one of the most popular versions of the game, played by thousands of people world wide. The remake was done as a learning experience, to see how Elite was written and to experiment with reverse engineering techniques. E-TNK ran under MS Windows but as Christian had released all the source code to the game it was quickly ported by other people to a number of systems including GNU/Linux, GameBoy Advance, GP32, OpenBSD, Mac OS X, BE OS, Atari ST, PalmOS and the PocketPC.

Unfortunately in 2003 David Braben, one of the original Elite copyright holders, asked Christian to stop distribution of E-TNK so it is now quite hard to get hold of.

Update: It appears that Elite-The New Kind has been made available again as part of the 30th anniversary of Elite in September 2014. It can be found on this site Elite:The New Kind.