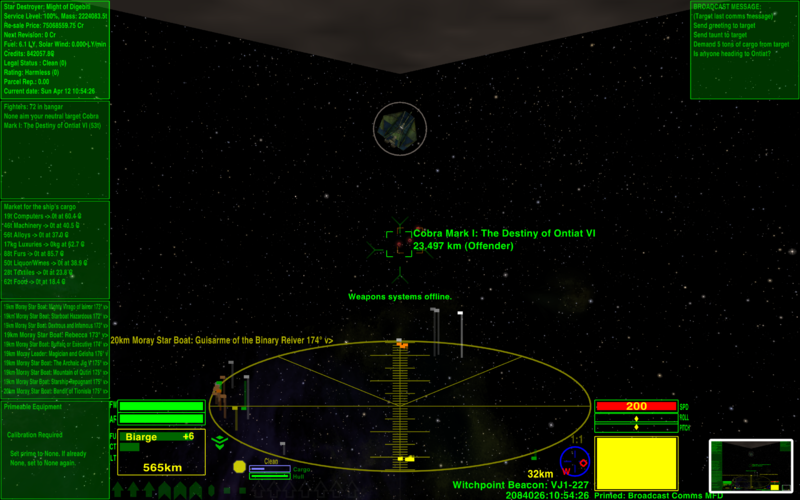 Offenders at 12 noon on the Scanner (orange/yellow flags) with peaceful traders behind at 6 o'clock (pure yellow)
This screen shot also includes the effects of Telescope which on the View Screen itself colours the offenders red
and on the scanner further colours the stations/rock hermits green, the sun white, etc.

Upgrade to the IFF (lollipop) scanner system. This highlights ships with an offender or fugitive legal status with custom ‘lollipop’ colours to allow rapid visual identification of criminals via the scanner.

In a bid to raise funds to replace their ageing Viper fleet, and in recognition of the lack of control they are exhibiting over many of the space lanes, Galcop have licensed a civilian version of the IFF scanner unit used in Police ships to quickly identify criminals in flight.

Welcomed by both Bounty Hunters wanting that extra few seconds advantage in identifying targets and nervous traders wanting an extra few seconds to avoid potentially hostile pirates the unit is available from Tech Level 12 or above planets for the princely sum of 2500 credits. It can also be resold for 60% refund of normal sale price at Tech level 12 or above. There is a 10 credit admin fee to sell the equipment.

The unit complements the Bounty Scanner equipment and has also been designed to work well with the Target Autolock OXP equipment. It is particularly useful when players run into an ongoing furball to quickly work out who the ‘bad’ guys are.

This won't tag all of the McNasties (some masquerade as peaceful innocents), but it will certainly identify a goodly number.