The energy in the energy banks of a vessel can be regarded as its life-blood, once it runs out the ship will die. On every ship the HUD will have indicators to display the levels of energy available. All equipment is powered by these banks, including the Shields, which contribute a considerable drain. When the shields are depolarised, more damage will cause a massive loss of power as the ship's systems short out. Fortunately the banks are recharged continuously by the Engine Main Drive turbines.

There are two important matters to consider when buying a new ship: how many energy banks are there - and how quickly do they recharge? The Cobra MkIII is one of the best ships available in the Vanilla game in this respect. It is excelled in both number and recharge rate only by the police Viper Interceptor. The Escape Pod is the worst (one energy bank, slow recharge). See the OoliteRS.pdf (Reference Sheets) which came in your original game download: it contains details of the other Vanilla game ships with these details.

Extra Energy Units with improved efficiency to standard units can be purchased at medium to high tech (level 8) starports, and will set you back a handsome 1500.0 creds. This will greatly improve your recharge rate, and thus your ability to maintain your shields in combat. 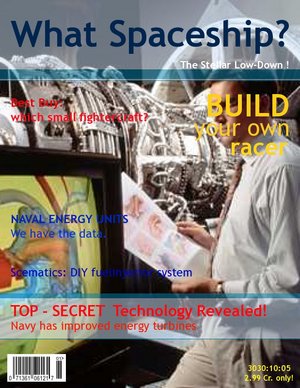 What Spaceship? featured an article in the last edition about developments at a Naval research base, based on various stolen papers. Said papers were delivered anonymously to the editors of WS?. Judging from the usually airtight security at the Naval base in question, the thieves must have been professionals (possibly insiders)? The motivation behind the 'donation' is unknown to the WS? editorial team: "Maybe they were Starship Otaku" quipped Matt Yellow, an amphibian reporter of WS?

According to the specs What Spaceship? mentions, this Naval Energy Unit is far superior in efficiency to current high-end civilian energyflux-rechargers.

The following OXPs all make the game harder (and more realistic).