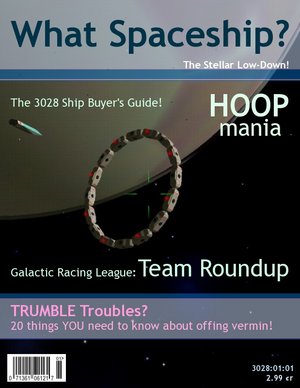 What Spaceship? is the galactic leader among consumer space craft magazines, and its buyer's guides are commonly considered the most reliable performance tests in the business. Few commanders will purchase a new ship without consulting this publication.

Pimp my Cobra: To celebrate the 60th Anniversary of the release of the Cobra Mark III, Cowell & MgRath in concert with What Spaceship? magazine engineered a competition. The competitors were given a standard Cobra Mark III and were freely allowed to modify its engines, interior space and design, exterior design and equipment. The response was so great and the standard of entries so high, that a wave of pimped cobras hit the shipyards.

Our sub-ether holo-facsimile machine chugged into life this morning, and rolled out a very interesting document from one of our more reputable anonymous sources.

What Spaceship is proud to divulge yet another stellar scoop: a draft press release hot off the desk of the Cowell & MgRath Shipyards, Lave, Marketing Department. Whilst we can’t reproduce the exact text of the document (protecting our sources and all that), we summarise as follows:

[drum roll] It's not particularly sleek or sexy, but it will plug a very profitable gap in Cowell & MgRath's Cobra line-up (we told our stockbrokers the same thing just this morning). Humanoids, Felines, Aquatics, Insectoids, Sentient Beings of No Identifiable Species, it is: [/drum roll]

Our verdict: If trading is your bag, and your pilot and combat skills will make up for the Carrier’s little less speed and little less heat, then welcome to your new ride.

Which Spaceship! Only ₢ 2.99 for a year's subscription!