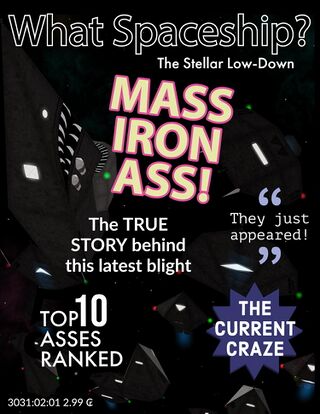 The usual media hysteria: Here the cover of What Spaceship?

The Iron Ass OXP, or fully styled Iron Ass Heavy Metal Dark Retro OXP, is a series of ship retexture set expansion packages by Murgh, starting with volume 1 utilising the original Aegidian models. When applied to the game, it will suppress most of the current native Oolite ships in favour of a dark, colourless, metallic monotone and primitive ship set, or optionally used as an additional shipset to add to one's Oolite fauna.

Its name does mean to imply that these ships are excessively loaded with weaponry as the spacer slang term would suggest, but rather to signify that texturally this OXP is metal overkill. The sets may co-exist with Iron Ass Witchpoint beacons, the ambience packs Iron Ass Lave and Iron Ass Missionaries, and their planned dirty sisters, the Rusty Ass OXPs. 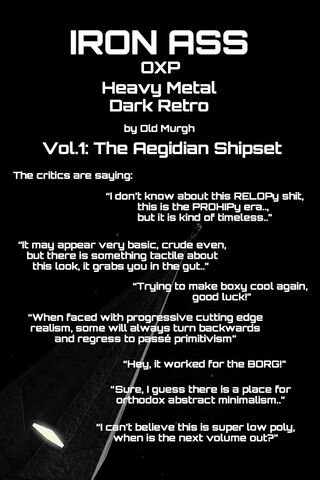 The Volume 1 OXP is a derivative work of which nearly all ship models are the original datFile models of our august founder Aegidian, dating back to 2004–05, with inspiration and *lore* inserts drawn from the text and images from Holdstock’s Elite Space Trader’s Flight Manual “Observer’s Guide to Ships in Service”, and the classic OXPs of Smivs who carried the Oolite retro low poly style (let’s call it RELOPy) to the next level.

This series of OXPs aims at a different direction of “retextured core ships”, and tries to emphasise the tactile aspects of raw, gritty metal and an expression largely stripped of colour, a bit in the Soviet tradition, It adds a more primitive set of subentities, and tries to look further back to the feel of the Elite Manual as it inserts as many textual clues from the source as possible –to the extent of spoon-feeding– so one may be less dependent on the use of the ID scanner.

Ships here adhere to the laws a mandatory all-out grayscale iron look, no fancy painted decoration –only what can be scraped into the metal. Colours are reserved for compulsory red-green signal lights, and any neglect in keeping on the traffic flashers is an admission of a criminal intent.

Converse as this is to the trends of smooth design and intricate detail, this OXP is certainly not intended as any protest or revolt against the cutting edge progressive high poly work (let’s call it PROHIPy) of Griff and peers (Old Murgh is an avid fan). But sometimes, when the Ooniverse is partially populated with exquisite objects, the more ordinary ones tend to suffer in comparison, and sometimes, we need ugly.

Those open to a more simple, uniform, anaemic and dystopic Oolite experience may consider running these OXPs. 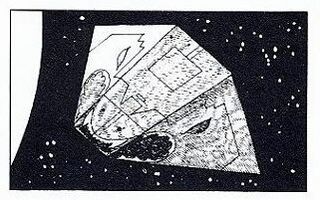 The Gecko "dragonface" illustration that has inspired many decal versions.

Titled Volume 1: The Aegidian Shipset, it nearly does what it says on the tin. However, the splendid Oolite native Thargoid ships, stations, hermitage, buoy, splinter, missile, cargo pod and such elements all remain undisturbed.

From the main Aegidian fleet, two ships have been replaced: the the Fer-de-Lance (too fat), and the Asp Mk.II (too long and upside down), in line with the aim to stay close to the original Elite shapes. The Aegidian ships do still appear however, as infrequent bonus ships under a "Prototype A" label.

The Elite Space Trader’s Flight Manual Gecko "dragonface" motif by the manual's unnamed artist has been widely emulated in several different styles across many other OXPs, but is here attempted, in a likeness as close as possible, to this modders ability, to resemble the original illustration.

*Actual ship sightings may appear darker in the game. 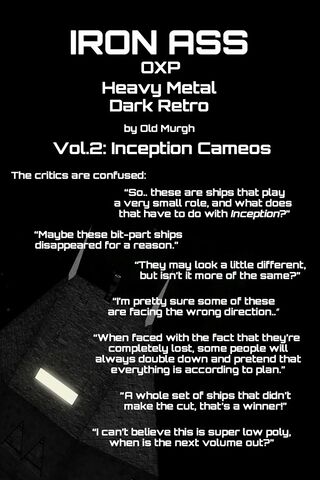 Pretentiously titled Volume 2: Inception Cameos, the name attempts to convey that herein lies ships that were present practically since the beginning, but for whatever reasons were given smaller roles in the history and lore of Elite ships. This is of course just a superficial concept since they are hardly unknown, but they were never featured in the glorious manuals, and their lot was to be assigned various degrees of supporting cast obscurity. Quite a few of them are however, in the opinion of some, very cool ships.

The 10 included ships in this package are the Bushmaster Miner, Chameleon, Cougar, Ghavial, Gnat, Iguana, Monitor, Ophidian, Salamander and the Wolf Mk.II. The original ship designs are believed to be by Warren Burch & Clive Gingras behind the Bushmaster which appeared in Archimedes Elite, by Ian Bell for the Cougar AKA Cat and the Gnat, and the rest by Angus Duggan author of Elite-A for the Chameleon, Ghavial, Iguana, Monitor, Ophidian, Salamander (not an official name), and by Rob Nicholson for the Wolf Mk. II, initially featured in MSX Elite.

The models were transcribed when possible thanks to the model collection of John Mackay (mackayj.doosh.net), and estimated by eye when no source was available. In the case of Elite-A, its Encyclopedia Galactica provided some of the shipyard names used in this OXP, but in other cases names have been tied to established names by reasoning and style similarities.

Young Murgh made the OXPs Wolf Mk II in 2005 and Old Ships in 2006, starting a long relationship with several of these ships and their unique shapes. They have also since been widely interpreted by many skilled modders, but with this Old Murgh closes his loop.

These very same models (except for the Gnat which is brand new to this author) are the basis of this OXP, however the textural treatment is quite another, and a result of techniques and tools that were (to this author at least) unavailable in 2006. Here the desire is to have more homogenously tesxtured ships fit seamlessly with the Aegidian Shipset in the Iron Ass style, in way maybe a little like most ships did a bit more when Elite was young.

As unaltered as possible from their RELOPy roots, only protruding weapons and engine barrels have been added to the 2005-06 models. Most of the ships are available for player ownership, except for the Gnat and the Bushmaster Miner which are uniquely NPC ships, due to their lack of hyperdrives.

*Actual ship sightings could also appear lighter in the game. 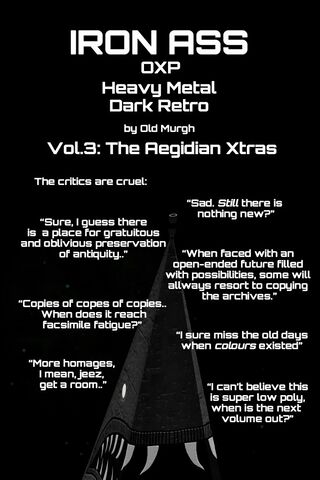 Aptly titled Volume 3: The Aegidian Xtras, the OXP contains Ironassed retexture versions of ships that Aegidian released outside of the core game, quite a few of them bearing names that contained the letter X in some form.

The Naga, Hamadryad, Ringhals, Josher and Python Class Cruiser "Sharkface" from 2004, the Python ET Special, Griffin Mk.II, Cobra Mark II-X , Sidewinder X, Asp X and Mussurana from 2005, and the Pelamis from 2006, all rate as classics in my book, and fit seamlessly into the existing fleet of Oolite native ships.

From the Aegidian OXPs: newships.oxp, PCC.oxp, griffin 2.oxp, Aegidian special.oxp, x-ships.oxp and pelamis.oxp (2004-2006), several of these ships have been already since been faithfully upgraded or reinterpreted, and some, as in the case of the newships.oxp, have not seen renovation for several years.

The illustration that inspired the Python Class Cruiser.

In this case they are of course not recreated true to their original style, as in the case with Smivs' Classic Suite, or given radical reinterpretation, as seen in Simon B's Neolite Ships, but rather here, they are given the Iron Ass treatment, constrained to a metallic black and white scheme, made rugged and homogenic so as to emphasise their similarities, and suppress their differences.

The models themselves are mostly as Aegidian left them, but with minor alterations. With protruding lasers and engine barrels only added to most of the models, a few models were altered to better fit this version of ships: the Python Class Cruiser, the Asp X, the Cobra Mk. II-X, Josher and Pelamis all underwent some model surgery, but hopefully remained true to the original shape design and are practically indistinguishable from their original shapes in what makes them unique and timeless.

A mention must be given to the inspiration Aegidian used when shaping the Python Class Cruiser, the illustration by the anonymous artist published in the pages of the Elite Space Trader’s Flight Manual capturing the concept of the most fearsome shark representation ever to be seen in space.

*Darker or lighter, it really depends on your settings. 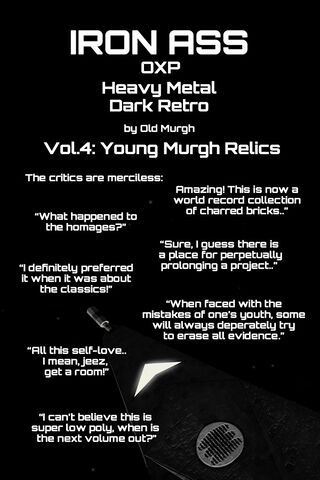 Tellingly, the instalment titled Volume 4: Young Murgh Relics is an OXP that contains Ironassed retexture versions of ships that this author made in the period 2004-06, when he was young, and the ships would have seemed less antiquated.

It is certainly no complete anthology, but it represents a digest of the many ships that were made, limiting this selection to the ones I find most interesting now. These are:

The Xpat, Rattle Cutter and the two police ships are NPC ships, while the Boyracers, Bandy-Bandy, Chuckwalla, Cobra Clipper (in both SAR and civilian issues), Fer-de-Lance Turbo and Taipan are player ships.

The AIs for the Boyracer and Xpat should see some development as there exist some ideas for expansion. Later versions of the Xpat will hopefully include some more accidental scenarios with potential for rescue and rewards.

Ironasses at a WIP stage:

Sometimes ship parameters ought maybe to have set slightly different than they initially were, one can realise in hindsight. In these OXPs, a few stats have been shifted from their original values, preferably little. This has only been done with the intent of balance, and in keeping with the scale that is established by the core ships. For detailed stats, expand the table below.

As a derivative work of the original Aegidian models, Iron Ass OXP Vol.1 work continues to be licensed under the Attribution-NonCommercial-ShareAlike 2.0 Generic (CC BY-NC-SA 2.0) To view a copy of this license, go here or send a letter to Creative Commons, 171 Second Street, Suite 300, San Fransisco, California, 94105, USA.

The Iron Ass OXP volumes 2–4 are licensed under the Attribution-NonCommercial-ShareAlike 4.0 International (CC BY-NC-SA 4.0), To view a copy of this license, go here.