"The Classic Ships" is a shipset OXZ which has been produced to bring the original Elite-style Oolite ships back into the game. With high-quality modern graphics, these charming Retro designs ensure that Nostalgia has never looked so good.

Note that addition packs add to the selection of what you have in your Ooniverse, while replacement packs replace the Vanilla game selection.

and one complementary OXZ

The Ships and their Background 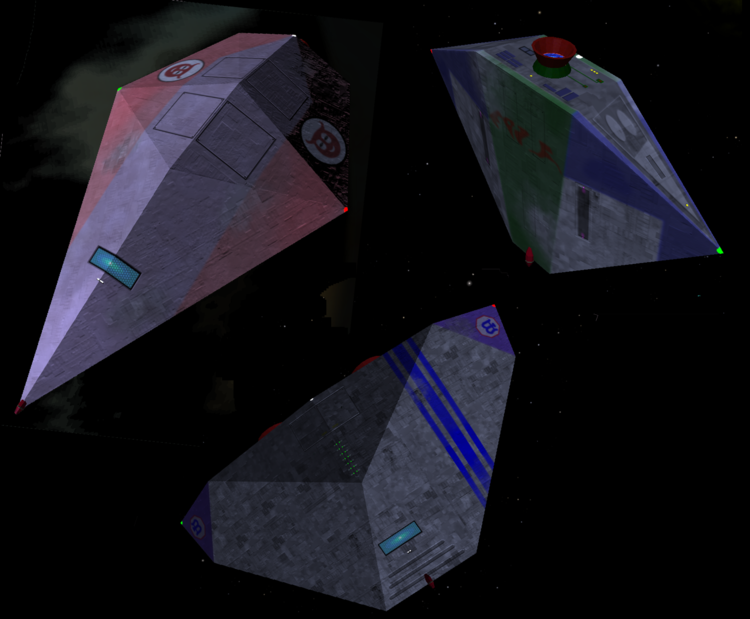 In the 31st Century, spacecraft of all types are needed in large numbers as the inhabited planets can only survive and prosper through inter-system trade. But ship losses are high - space is inherantly dangerous, and more perils await the spacefaring community than just natural hazards. Many ships do survive though, and indeed some of the ships encountered could be hundreds of years old.

Due to frequent losses and also to sustain the burgeoning galactic economy, ships, lots of them, have to be built quickly and cheaply, but they also have to be incredibly strong and durable.

With one or two exceptions all the ships of this time are pure spacecraft, built solely to fly between Star Systems, with the GalCop stations that orbit all inhabited Worlds as their departure and arrival points. As a consequence they have no atmospheric or planetary-landing capability as these are simply not needed. They are therefore built in space at huge orbital shipyards which are dotted around the Eight at suitable planets and moons.

Due to the difficulties of working in zero-G, the need was for designs that can be fabricated relatively quickly and easily. It therefore soon became clear that the optimum manufacturing method was to design and build large, un-sophisticated hulls, with huge panels of Duralium Alloy being welded together into simple, easy-to-construct forms. The Duralium panels used can be as large as five by three metres and are nearly 1/2 metre thick, as this offers maximum protection against micro-meteorites and radiation, and also some protection against laser fire.

By building the ships as large as they are, it is also possible to include all the equipment, running gear, engines, fuel tanks, holdspace, living quarters, life support and ordnance within the hull itself. This offers maximum protection to all the ship's systems.

These ships would be just as effective (and even easier to build) if they were just big cubes, but most sentient races possess a sense for aesthetics, meaning that the demand is for something more attractive than a flying brick. So despite the minimalist ethos behind the designs the various models are still stylish and distinctive.

N.B. Ships not to scale

1) Where appropriate the ships have flashing navigation strobes.
2) The Thargoid Warships have the alternating red/green colour scheme described on the Wiki.
3) The Moray Starboat and Medical boat (submarine flying boats built by aquatic Races) have a unique 'organic' hull, and special 'HydroStellar' drive units capable of propelling the craft in water, atmosphere or space.
4) The ships will become visibly derelict if the pilot ejects in an escape capsule. As the ship shuts down the navigation strobes are switched off, followed a few seconds later by the main interior and hull lights. As the exhaust starts to fade, the ship begins to gently tumble, and finally the engine powers down completely leaving the ship dark and dead, drifting in space.
5) Extra Textures. Previously, variants of three types of ship shared common textures, and three new Pirate ships were introduced in Oolite v1.80, so six extra textures have been added, bringing the total to Thirty Seven. Each ship specified in shipdata now has its own unique texture.

The "Classic Ships" are facsimilies of the original Elite ships, first seen as wireframe graphics in 1984.

They were re-modeled and textured by Giles Williams (Aegidian) when he first coded Oolite in 2004. In this form they were the default ships until the release of Oolite v1.80 in June, 2014 by which time they were looking rather tired and dated. Although now superceded as the default shipset, they are still held in high esteem by many, and have a strong nostalgic and Retro appeal. In producing this Expansion, the author's aim was to re-imagine them in a thoroughly modern way while preserving the heritage they represent.

The original models have been used and are unchanged. New models have been produced to add engines to the ships and a Gun model has also been utilised. This approach retains the authenticity of the classic shapes while giving them the more rounded, complete look demanded today. The texturing has also been completely updated to meet modern standards. The texture designs are heavily influenced by Aegidian's original set, but have been extensively re-worked to meet today's standards of detail and quality. Using diffuse, emission, normal and specular mapping this shipset requires a shader-capable computer to look at its best although it will work (and still look good) on most non-shader machines. Users of low-end computers might find the high-resolution images too heavy on resources however.

This OXZ has no affect on gameplay or game mechanics.

This work is Licenced under the Creative Commons Attribution-Noncommercial-Share Alike 4.0 Unported Licence. To view a copy of this Licence, visit

The Classic Ships expansion was developed by Smivs.

Thanks must first go to Giles Williams without whom none of this would have been possible. A very big Thank You also to all the community members who helped during the development phase with encouragement, comments, observations and suggestions. Particular thanks to Disembodied and Rorschachhamster for decals used on some of the ships, and Capt, Murphy for scripting inspiration.

v1.2 - Released 11th may, 2015. Bugfix for Mac compatibility, and to fix mis-positioning of Viper Interceptor engine.

The Classic Ships are available via the in-game download manager, or can be downloaded from the links below.