The Leviathan Naval Carrier is the new main fleet support vessel employed by the Galactic Navy to combat the Thargoid menace both in-system and in the interstellar gulfs.

In the aftermath of the Galactic Police's commissioning of the Behemoth carrier vessel, the Navy took a long, hard look at their own aging fleet assets. What they saw was not impressive, antiquated Anaconda command vessels, squadrons of dated Cobra Mark I and Asp Mark II fighters and a smattering of other frigates that dated back to the very founding of the Galactic Cooperative. With the Thargoid situation deteriorating steadily, the Navy top brass realised they needed to modernise or be left behind. The spearhead for their rebirth was a fleet carrier capable of taking the fight to the enemy whenever and wherever they were encountered.

Birth of the Leviathan

The original plans were drawn up by a team headed by the founder of Murgh Shipyards and the first prototype was laid down at their orbital headquarters. The Navy's brief was simple, but to the point: "Create a ship that is capable of operating for extended periods in deep space, with the ability to carry, equip and maintain a full tactical wing of Naval fighter and lander craft and with a reasonable offensive/self-defensive capability for the best possible price." Murgh's designers worked hard on the plans and within fifteen months were at the stage where they could begin laying down the actual hull of the immense ship.

The vessel's size was such that it quickly out-grew the capacity of the orbital shipyard, so the shipyard had to be extended and updated around the Leviathan! The initial prototype took almost two years to be complete and was immediately sent out on its fleet trials. The navy assessors were concerned by the fact the huge ship only carried six plasma casters in ball turrets along the flanks, but concluded that the Leviathan would have to be designated as a support vessel, not a front line ship. This suited just fine, since its cavernous launch decks could accommodate far more ships that the tactical wing first envisaged by the preliminary brief.

Following fleet trials, the Leviathans were rolled out across all eight Galaxies, ready to be deployed in a variety of roles, from deep space patrols to humanitarian relief missions. It is a credit to the Galactic Navy, and a nod to the fearsome reputation that the Leviathan swiftly gained, that wherever a Leviathan is deployed, acts of piracy swiftly dwindle. Indeed even the rumour of a Leviathan arriving in system is enough to force most pirates to either lie low or look for any means to avoid it.

In normal operation, the Leviathan will be accompanied by at least two of its fighter craft, which acts as scouts and a first line of defence should their mothership come under attack. In battle, the Leviathan will most often drop back and begin launching wave after wave of fighters, recovering damaged vessels and escape capsules through its yawning docking slit and acting as a rallying point for squadrons to regroup on. The powerful sensors of the Leviathan are believed to be able to cut through most forms of cloaking or jamming technology, although naval spokesbeings neither confirm nor deny this. Close in, the high-powered plasma cannon are a fearsome prospect for any wound-be attacker, while the close defense fighters tend to offer no mercy to those who break through to attack the Leviathan directly. 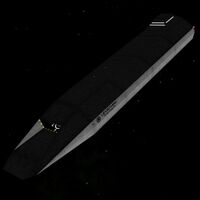 The original Leviathan is found in the Military Fiasco V2.0 OXP - and a newer version is in the Iron Ass OXP (vol 5)