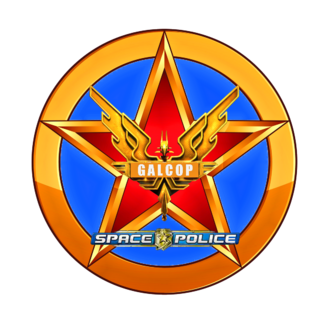 The Galactic Police (GalCop), is the law enforcement organization of the Galactic Co-operative of Worlds. Its task is to ensure safety and prevent crime on the space lines of member systems. Any event on a planet or moon is in the jurisdiction of the local government.

While officially controlled by the Council of Justice, it is common practice to patrol in a combined team with local space police or navy units. For troubled systems, GalCop deputies can be sworn in - some of these deputies are actually hired mercenaries. Some local governments have replaced GalCop almost entirely with their own law enforcement troops.

A strict rotation process is in place to prevent officers from becoming criminals themselves. However, especially in undeveloped areas, corruption is widely spread, and it's not unheard of that the local police officers do indeed become pirates too.

A special unit of hand-picked GalCop officers who have shown exceptional ability. Equipped with advanced ships and weapons, they target the high level organized crime activity in sector 7.

Handles the daily business with the various contractors working as deputies. The Bounty Hunter Guild would be just one example.

The Galcop deputies consist of hired civilians and organizations under the direct command of the local GalCop system branch, most of the time you can see them at troubled and dangerous locations. Their major job is to support the space police officers, and therefore they usually fly in groups with regular units.

While the ships of choice are the Viper and the Viper Interceptor, the organization receives permanent donations or large discounts on several varieties of fighters so, in reality, a wide pool of choice is available.

This page includes scenarios from various OXP's, in the core-game only GalCop Vipers/Interceptors act as space police.

The ships above and