The Behemoth-class starship is GalCop's mainstay battleship. Fitted with 8 ball turrets (usually armed with plasma cannons), and with a belly full of Navy Vipers and Navy Asps, the ship is a formidable opponent for humans and Thargoids alike. Most Behemoth-class vessels are currently assigned to planetary patrol/search and rescue. During peacetime, the Behemoth accepts civilian traffic at its docking port, the military engineers providing the best overhaul/repair facilities to be found. Repairs, fuel and equipment are expensive at these facilities, typically twice the amount that you would pay at a civilian space station. The Behemoth was designed and built by the Aegidian Spaceworks subsidiary of Aegidian Industries, winning a competition with Marett Space Corp. for the naval commission. 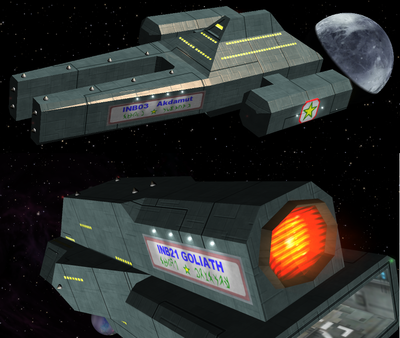 2 of the 4 versions of Behemoth 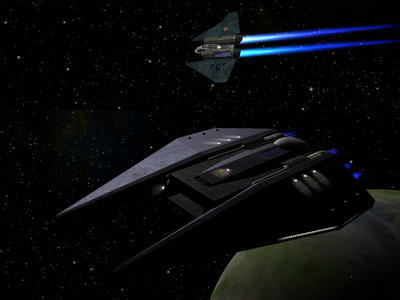 The first impression is size. The class is called Behemoth for good reason - the ship must be sized appropriately to carry numerous interceptors. However, for fugitives, this impression is not long lasting. If an unfortunate pirate vessel should come too close to a Behemoth, it will open up with its formidable weaponry. While plasma cannons are somewhat rare on small ships (and also fairly ineffective), the large cannons carried by a Behemoth literally fill the space around the targetted vessel with searing plasma, which quickly strips shields and tears through duralium. Many a fugitive has been caught unawares - the plasma bolts seen against the bulk of this ship look tiny and ineffective, and are paid little attention until they begin to impact.

A behemoth fires a broadside

If a full broadside fired by the Behemoth doesn't get a fugitive's attention, the Vipers that begin launching certainly will. The Behemoth is as well defended by Vipers as any space station in a wealthy star system.

The Behemoth has a surprising turn of speed; large ships such as this are generally limited to very low velocities to prevent the frequent strikes of small meteorites from causing serious damage. However, the Behemoth is fitted with military shields (the shield generation plant alone accounts for a full third of the giant ship's mass), and the Behemoth can survive a high speed collision with asteroids up to three tonnes in mass without taking any damage.

Docking with a Behemoth

Most of these ships will accept civilian craft, so long as the commander is in good standing (i.e. not a Fugitive). However, the captain of a Behemoth will rarely make special allowances for visiting craft (such as changing course or slowing down). 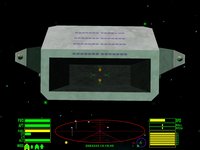 The captain is also not particularly bothered if you come to grief whilst docking; as previously mentioned, the craft is strong enough to collide with a large asteroid at high speed, and it is unlikely you will even scratch the docking port if you get it wrong (your ship will almost certainly require expensive repairs after a botched docking with a Behemoth).

The general procedure is to fly ahead of the Behemoth until you are a reasonable distance away, and then turn to face the craft and line up with the port. Since both your ship and the Behemoth are flying towards each other, you will have a high relative speed with the ship, and therefore there is very little time to get lined up. Once you have lined up, slow down to a halt, and wait for the starship to scoop you up. This lessens the chance of a botched docking from causing serious damage to your ship.

If all else fails you could just press Shift+C to engage the autopilot.

BGS enhances the docking experience with a Behemoth

Starting with version 2.0 of the Behemoth a second carrier is included with the docking slid in the back. Docking will be much easier here of course.
Starting with version 2.4 the Behemoth has a much friendlier behaviour. It will not just fly through everything, but will avoid obstacles. This means it will try to avoid the player when he tries to dock manually in the front! Version 2.4 also start to make use of the new scripting system of Oolite 1.71+ but is still fully compatible with Oolite 1.65

This OXP is an old Oolite favourite. First created by Aegidian, it has had other models added, its AI's improved, various tweaks done, etc. Thanks to its history, it is the only fundamental Galactic Navy oxp with a proper license (and is thus on the in-game Expansions Manager), can operate without the Galactic Navy OXP, and is used by the Anarchies OXP for Amnesty Offers.