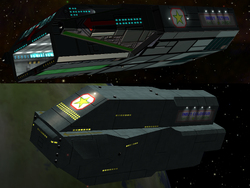 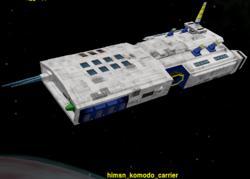 This page links to the two Navies currently on offer, as well as other navy-related pages such as ships.

Each of these comes with its own Lore. Galactic Navy is syncretist, HIMSN is purist, 249th leans towards HIMSN, but adds far too many in-system ships for the creators of HIMSN.

You can, of course, ignore the lore and add all of them together into your Ooniverse! They will not fight each other, though.

OXP's without their own pages only, those with pages are below.

Configurable Populator has code for altering the population of the solar system (to reduce normal traffic in times of war)
Station Validator remembers the destruction of orbital stations, preventing their magical resurrection on one's next visit to the system. Spara (2014).
Imperial Star Destroyer contains code for Factories (making Tie-fighters/Tie-interceptors)
Leviathan Platform - a planetary defence platform
Squadron Command System - for commanding a small squadron: may need changes to ships' AI too!

This category has only the following subcategory.

The following 36 pages are in this category, out of 36 total.