This class of starship is constructed by The GalTech Industries Corporation exclusively for Starfleet. The ships are designed to combine both long-range exploration with a substantial military capability. Due to the exclusivity deal in place with Starfleet and the huge production costs these vessels are not available to any organisation other than Starfleet nor are they available as player ships.

The ship is available as an npc (non-player character) ship only. These vessel’s primary role is exploration and therefore they are typically encountered investigating systems. Their remit does not include the enforcement of local or galactic law and hence they will not attack other vessels except in self defense

This OXP requires the BigShips OXP produced by Thargoid and Eric Walch to also be installed (A copy is included in the OXP download for convenience). The OXP has been developed for Oolite v.1.76 however it should also be upward compatible with future releases.

This ships is available on the in-game Expansions Manager and additionally here: ConstitutionClassHeavyCruiser-1.0.oxz - Move the OXZ file to the AddOns directory of your Oolite installation. Start the game up while pressing the "SHIFT" key until the rotating ship appears. The ship should than be added to your game. 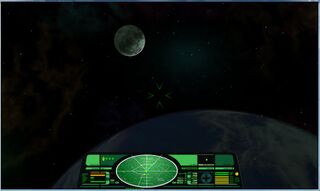