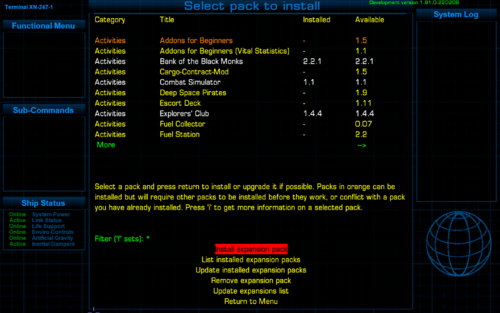 The Expansion Pack Manager was devised by Cim for Oolite v.1.80 (2014), and ushered in the move from OXPs to OXZs.

Press i for more information on your chosen expansion pack: The URL for even more information is copied to your clipboard automatically when you do this (unless your computer runs Unix and you are playing Oolite v.1.90 or older).

Yellow Ready to download and install.
White Installed and at the current version.

Cyan Installed; updated pack available for download.
Orange Ready to download, but Oolite will also download extra packs to make it work.
Brown Conflicts with an already installed pack.
Gray Incompatible with this version of Oolite.

Downloading and Unzipping an Expansion for Tweaking

These OXP's create a scenario and force all other oxp's out of the game (unless you tweak the scenario to let one or two back in!). The only examples so far are the SOTL oxp's. There is an issue with the Expansions Manager: