From Elite Wiki
Jump to:navigation, search
Our members are engaged in an armed struggle against the Biesmaan Dictatorship, a brutal regime that has invaded and occupied our homeland. We're in desperate need of experienced commanders to lead our forces in combat. Would you be willing to help us? 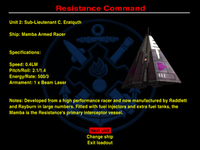 Reminder: SCS will not work if your weapons systems are offline!