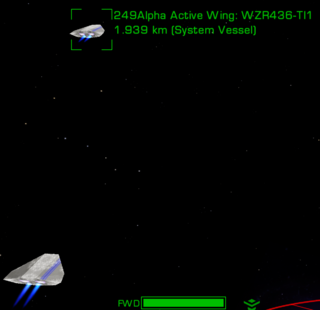 As the Ooniverse descends into lawlessness, Naval Reserve Wings have been multiplying under what little influence GalCop still holds. While mostly serving as simple law-abiding citizens capable of holding off or surviving pirate encounters, several wings have united under the banner of the 249th NRW, an honored Reserve unit constantly on call to assist in police action. The 249th NRW has adopted a stellar camouflage pattern as their colors, a rather distinctive mark if you can keep your lock on them.

When the Thargoid menace first reared its head, an impromptu alliance between 249 different Democratic systems issued military grade lasers to their merchant marine force. After the initial mobilization, these merchant marines kept their weapons and continued recruiting and training forces.

The 249th Naval Reserve Wing was established to give these vessels an official standing with Galcop. Each Democratic system navy has a 249th NRW on their roster. In practice, it is a formidable militia. Negotiations and design collaboration are in progress to establish a heavy capital ship as the local 249th Naval Reserve Headquarters, which may also be sent out to nearby multigovernment systems in a state of factional strife in order to rack up funding and practice in the form of bounty.

The premise of this oxp is that the war against the Thargoids is being lost, hence the call for naval reserves to fight them. Galactic Navy has a heavy naval presence (just mooch around Isinor when the Galactic Navy OXP is loaded into your AddOns folder!) and the author of this oxp wanted a lighter touch. HIMSN has a much reduced naval presence, and was preferred by Rese249er, who hoped for compatibility with the final version of HIMSN which never appeared.

Early versions establish core Alpha Squad Cobra 3's with military lasers, a high probability of shield boosters and enhancers, and a custom paintjob in every role except pirates or Thargoids. At least 2 are spawned in every system in one role or another. They also have energy recharge and banks matching the player's starting Cob3.

v1.2.3 introduces a fractalized, darker camouflage pattern and a cruiser based on the Anaconda for a bit more firepower. The 249th Cruisers also will appear in police roles.

v2.0.1 establishes Bravo Squad, made up of ships from Mandoman's VTBSShipset.

v2.1 establishes Charlie Squad, made up of Zieman's Far Arm ships Hunter as a solo hunter and Z-ships Python Courier and Cobra Commodore as standard Reserve/Active cruiser and wingmen, as well as a duo of Cobra Commodores.

v2.1.1 expands the populator script to include Bravo and Charlie squads.

Fresh from the design board of 249th NRW R&D, the Holographic Numerical HUD is the latest in visual aid for navigation and dogfighting.

These chaps appear at every single system without fail. And are rather more in evidence than the regular GalCop police. A major change to the police-pirate ratio.