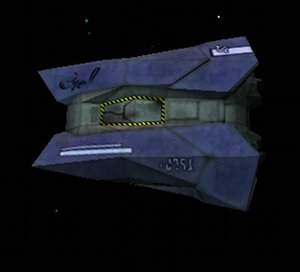 I am restarting my original project to re-imagine the classic ships to take advantage of the expanded features in Oolite 1.73 (oooh - bleeding edge!) including normal mapping to create ridges, with custom shaders, specular and glow maps. The trick is to create detailed, medium-poly, models which still fit the classic Elite look and feel. I'll also be working to preserve backward compatibility so that 1.69 will still render something which looks respectable. All ships are under the GNU GPL v2 or compatible license. You may use these OXPs to make your own ships, so long as you extend the same courtesy to others. Skins, maps, etc are under creative-commons attribution-sharealake. I don't mind if you want to base your own work off mine, provided due credit is given. If there are any questions or concerns, do ask.

Simon B's Ships OXP is a later 2014 OXZ on the in-game Expansions Manager which contains roughly half of the original ships shown below.

Note that the screenshots do not show Shaders: this is because they were taken on a non-shader computer!!

Retextures for the Vanilla game ships only.

The author has uploaded the version 1.0 files to http://app.box.com/neolites

For version 1.1 download links see the last section of this page.

Neolite Core v1.0. This is a full replacement set for all native oolite (non oxp) ships.

ADCK wrote a special override-addon which reinstates the original ships, preventing them from over-writing the standard vanilla ships, available in my box.net (ADCK's Box)

The Neolites one has a readme with instalation instructions, (and the Deepspace one is simply extracted to your addons dir (click yes when asked to overwrite)).

"Noob". This OXP only replaces ships with better looking ones

To play the OXP, unzip the download file. This will create a folder named "Neolite.oxp".Move the "Neolite.oxp" folder to AddOns. As with all OXPs, its the folder ending .oxp that you need to put in Oolite's AddOns folder, otherwise Oolite will not read it.

CAVEAT: non-neolite OXPs which use like_ship entries in their plist may inherit subentities from neolite ships. These oxps will be fixed as they are detected.

Note (2012/01/29): The version of Neolite.oxp available from http://app.box.com/neolites does not contain all of the texture files required due to file size restrictions set by the host. You will also need to download neolite-textures.zip and manually copy and paste the contents to the Textures file in Neolite.oxp.

Players are encouraged to add to the project. See the links for more information.

Project Announcements: I'll try to remember to put major announcements in this thread

RFC: Fancy Classics: the original announcement, historical and ongoing discussions. This is where you report your observations and watch for developments.

How to reskin a Neolite Ship: a tutorial covering critical aspects of neolite skins, including special effects.

How to make a Neolite Ship: a tutorial covering the standard neolite conversion formula using Wings3D. If you want to convert you favorite ship to the neolite style, this is your first stop.

Neolite Home: Homepage for various Neolite oxps. Only stable oxps are listed on the wiki. Projects in development may be found here.

Neolite 1.1 is a repackage of Simon's original work by Capt. Murphy to facilitate end-users being able to installing multiple re-texture packs without conflicts. It also fixes a few minor bugs in Neolite 1.0, including a missing texture for the Mamba on non-shader computers, a missing exhaust plume on the Constrictor, and (with v. 1.1.1) a referencing error for the Boa and Boa Cruiser's customised Escape Pod. Neolite Companion has also been made standalone, whilst any plists in XML format have been converted to Openstep format.

To install extract the folders named *.oxp from each download and copy them to your Oolite AddOns folder. There is no need to attempt to combine the 3 OXPs, the installation is designed to work with them as separate OXPs in your AddOns folder.

Neolite_Companion_1.1.oxp is now a standalone OXP that installs the Neolite Companion ships.

Neolite_Wolfies_1.1.oxp is a standalone OXP that installs the Neolite Wolfies. Only change from version 1.0 is that plists are now in Openstep format.