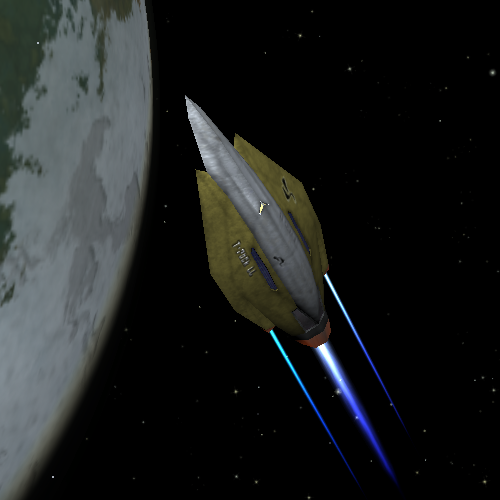 This page is devoted to Simon's Neolite ships. He also created the Re2dux Shipset.

This is a 2014 collection of Simon Bridge's models and textures from the following OXP's:

I've always been a fan of Simon Bridge's modeling and texturing skills. My aim with this OXP was to add some visual effects by rendering the ships with new shaders and textures. Well, the shaders aren't exactly new. I used Oolite's built in vertex shader and Keeper's fragment shader. Another goal was to bring these ships up to speed for Oolite 1.80, which offers new AI's and ship roles.

I left Simon's diffuse textures untouched but I tweaked the models in Wings3D to give each ship a streamlined appearance rather than all hard edges. I used the diffuse texture as a base and created from them the following:

I thoroughly tested each ship for validation of all hard points for the shipdata.plist. I adjusted the weapons and view positions as needed. Aft views were edited so the exhaust plume would not obscure the HUD or interfere with targeting. I amended the shipyard.plist and created a shiplibrary.plist.

Move or copy the file, "SimonB's_Ships1.0.oxz" into your AddOns folder. Where that resides depends on the location of your Oolite installation.

Minimum requirement is Oolite 1.80. No dependencies.

From Guide to Unlisted OXPs

Note that a number of his ships come with a customised HUD!