A member of the Neo-Asp family. Smaller and slower but with a slightly better energy recharge rate, some cargo space and a 75,000₢ lower basic price. Based on the designs of Simon B, this ship's purpose was reconnaissance and scouting. While decommissioned from the Galactic Navy years ago, they still form part of some local Navies. Unfortunately the majority of the Asp Explorers are now used by assassins and pirates.

Originally produced by the Zorgon Petterson Group this craft is today offered under license from SoloTek Industries.

From the original ReadMe

Asp Mark I is based on the model used for Asp in ArcElite, which is very different from any Asp in any other version of the Elite. It offers a slightly smaller, poor man's version of the Asp Mk II, a bit smaller, a bit weaker but with a very small amount of cargo space.

ArcElite also professed a variant Asp model that is different enough from the one used above to warrant a separate ship. This one is called Asp Explorer (after the Asp in FFE) and it is somewhere between Asp Mk I and Asp Mk II in speed, but slightly above Mk II in strength. But it is also a bit larger than the regular Asp Mk II and is slower at roll and pitch.

Additionally, because of its size, the ship also has a large tank for fuel, allowing almost two consecutive jumps without the necessity to refuel at the local sun.

Both of these ships come with a re-imagined HUD. The package also includes a HUD for the regular Asp Mark II, for those who want to use it for the regular ship (but you'll have to edit the shipdata for Asp Mk2 yourself). 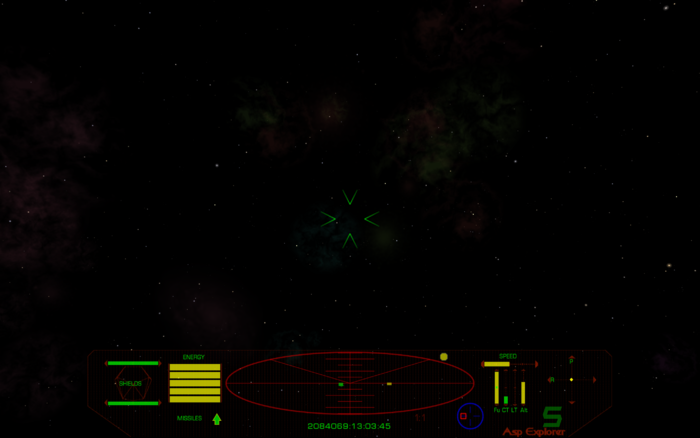 Wolfwood's HUD for his Asp Explorer

The Asp Explorer could be found in 2 packages, both based on Simon B design:

For Simon B's Ships OXP the minimum requirement is Oolite 1.80.

This ship is part of the Neolite Ships and the Simon B's Ships OXP.

The original Wolfwood version is in the Wolfwood's Variants OXP

Copyright: Simon Bridge - Distributed under GPLv2 and compatible licenses. Simon based the ships on original work by Wolfwood.