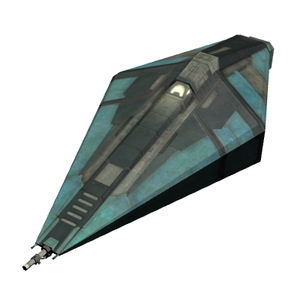 Zorgon Petterson are best known for their expensive and luxurious Fer-de-Lance, introduced back in 3100. Overnight, they turned from being a small insignificant tweaker of other spaceships into being the ultimate crafters of luxury and elegance. The long list of fine touches to their Fer-de-Lance is legendary: everything is high quality and custom-designed. Not just the burr-walnut finish on the astrogation panel (specially devised by Aegidian Industries), the bespoke excellence of the deflector array with its silver-cased pulse-chambered manotox field generator (again specially devised by the specialist heavy electronics arm of Biarge United Shipyards - and its pure gold connectors for linking to the tantalum field coils of the isodentrix array - also specially commissioned from Aegidian. Every minor detail has been scrutinised with care and painstaking attention to minutiae.

With the development by the Navy of the Behemoth and the Viper, ZPG then licensed the rights to the Asp from the Galactic Navy, and established a foothold in naval manufacturing.

In 3126 ZPG were bought up by Faulcon de Lacy of Reorte.

The Corporate Headquarters is located at Xexedi. Their museum there is well worth visiting.

Asp Mark II (taken over from the Navy by ZGP and built under license)
Fer-de-Lance (the best known ship of the company, expensive and luxurious)

Asp Explorer - A scout ship with some cargo space. Originally produced by Zorgon Petterson Group this craft is today offered under license from SoloTek Industries.
Asp Mark II Special - 2 generations had been build. The first was later used to design the Asp-X, the second is a smaller but still deadly Asp Mark II.
Navy Asp Mark II - An Asp specially designed for the Galactic Navy. While the first generation wasn't able to live up to the expectations, the second (based on the Asp Mark II Special) is still serving in several navies.
Asp-X - A powerful heavy interceptor, based on the design of the first generation of the Asp Mark II Special. Originally developed for Her Imperial Majesty's Space Navy but also licensed for civilian use.

Monitor 1 developed in 3012 and sold off to Monitor Industries two years later due to its slow speed damaging ZPG's corporate image.
Mussurana Void Yacht - A ship made for the rich, with an interior to match and defenses plus weaponry to protect it.

The following ships are all based on the designs of Simon B:
(Click on the thumbnail to view full-size image)

The rest of the Big Four shipbuilders