The Fer-de-Lance Turbo Cruiser was developed by Zorgon Petterson Group due to popular pressure to improve upon the shielding and speed performance of their most marketable brand. The turbo compressor and fortified hull enhancements were not allowed to get in the way of the luxurious features that the typical Fer-de-Lance customer is accustomed to, hence some shrinkage to the available cargo capacity was inevitable. 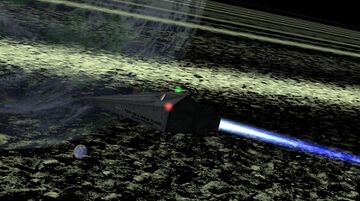 Pilots who are finely tuned to the agility of the predecessor have observed that the Turbo Cruiser has a somewhat more sluggish handling, sparking a movement among the mechanically inclined to fine-tune and improve upon the ship's manoeuvrability.

With much pomp, the new model was introduced at an extravagant event, unveiled by the heir-in-waiting Prince Fletcher Zorgon-Petterson VII himself. The very moment of revelation was inevitably accompanied by the high-pitched voices of the rodent teen music group, the ZeePeeGees, performing their immensely popular musical hit song "You Should be Lancin'" to the rambunctious roar of an exuberant audience.

As a matter of course, songwriter William Redspeare was uncredited.

As with the original Fer-de-Lance, the Turbo Cruiser equipment bays come prefitted with high quality, custom designed equipment. Fittings are standardised though, so one could -as a temporary fix- replace a piece of kit with an inferior product, naturally only when no FDL-dealer is available.