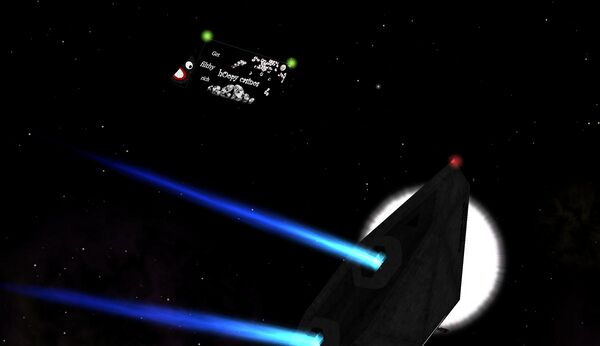 An Ad-droid barely avoiding a rude ramming by a speeding Cobra.

The OXP simply titled Lave adds many of the features to the Lave System that are described in The Dark Wheel novella, but weren’t originally there to see in the game. It was written by Murgh in 2006, and later updated by Kaks‎ in 2008 and by an anonymous kind modder in 2009. A retro reboot in the Iron Ass style was made in 2022.

Learner pilots practice in Trinket ships near the station under the command of an instructor, Restaurant Junks ply their trade, Herald Ad-Droids shuffle their billboards, transport liners transport, an ominous Cobra lurks, a small moon is added and more. It also bumps up Lave's tech level, as that was how Murgh understood the descriptions in The Dark Wheel, which he was emulating (useful for buying kit for your ship - you can now get fuel scoops and an ASC, and if you run SW Economy, you can now buy medicine). 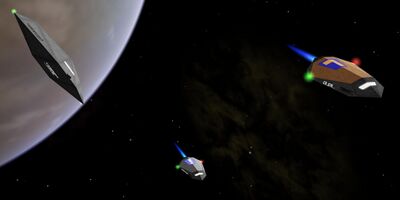 Instructor and pupil near Lave station.

A food junk pursued by a hungry patron.

In January 2022, Old Murgh came out of retirement and began chipping away at the old shapes and fabrics, attempting something like a remastered –though still RELOPy– version. An Iron Ass Lave beta was shared in April 2022.

Iron Ass Lave OXP is licensed under the Attribution-NonCommercial-ShareAlike 4.0 International (CC BY-NC-SA 4.0), To view a copy of this license, go here.