This OXP gives the system of Diso in Galaxy 1 a make-over. Four new planets are added to the system, one of which has an orbital station. A nebula effect is also added, making Diso one of the prettiest systems in the Galaxies.

An old OXP, predating the rejig of commodities with v.1.82 - the market in Diso B is accordingly broken.

There was an early attempt to redefine the Old Worlds sector (in which Diso is located) as systems with just one planet in each of them. This oxp conflicts with that (as do all the other ambient oxp's which add planets)!

This was the first addition of extra planets to a Solar System (they also have moons). The Vanilla game just has the one planet in each system. 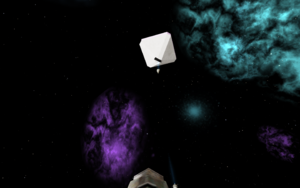 It seems that Murgh originally uploaded it to Oosat2 (once located on this website prior to being blasted by Thargoids!).