Diso OXP by Murgh & Eric Walch (2010) gives the system of Diso in Galaxy 1 a make-over. Four new planets are added to the system, one of which has an orbital station. A nebula effect is also added, making Diso one of the prettiest systems in the Galaxies.

This planet is mildly noted for its ancient Ouza tulip plantations but is ravaged by frequent earthquakes. The Diso Digital Corp has built a planetwide sensor-network, with the latest OO32000 super-risk processors. This is capable of predicting the earthquakes a full day before they happen. Houses on Diso are built on giant shock absorbers and are often mobile. Diso is also famous for its 10,000 km long Veers fault. (Famous Planets OXP)

Diso is Jupiter 8k by Another_Commander showcases the improvements on custom planets that were made available since Oolite version 1.89. 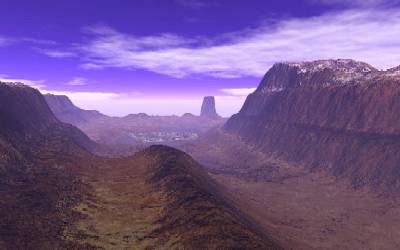 Diso is member of The Old Worlds.