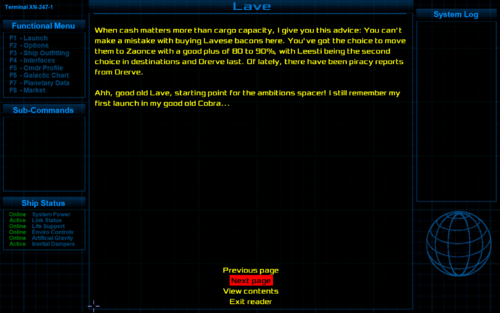 The Traders Almanach is supposed to be based on the personal notes of the seasoned and experienced trader Commander James "Mercury" Kilbery. This guy has seen all the systems in the eight galaxies, including Oresrati in the remote seven o'clock corner of galaxy sector eight - at least that is a common rumor about this person. Commander Kilbery can not be queried on the correctness of the above mentioned statements as he is supposed to be lost in witchspace.

Memory sticks with more or less complete variations of The Traders Almanach can be found on almost every trading ship on the universe. This is one of the reasons why there are sometimes odd breaks in the writing styles - many people have edited their own version of the Almanach, changing entries on piracy, adding sightseeing experiences or their own notes on milk runs. Various versions of the Almanach are unique like fingerprints, and there is a whole department in the Ceesxe Economy Research Center dedicated to track down the evolution of various different sub-trees and variants.

The library book OXP version covers some 90-odd systems in the first galaxy only.