The first prototype of the basic DODO station (GASEC model) went into orbit around Leesti in 3138. At that moment the Leesti Coriolis was wiped out by a the comet Hal 9001. Scientists luckily predicted this impact a few months before the event after a major asteroid storm in the region. The new Dodo model could withstand impacts for much longer but it remains unclear why the new station was placed exactly in the same risky spot (possibly for budget reasons?). The Dodo-station proved to be a success. (P.A. Groove Stations OXP) 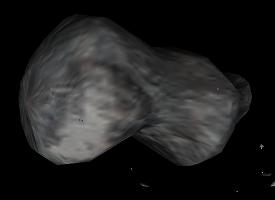 The OXP Asteroid Storm adds new asteroids and a beginner mission in the Leesti system.

The Famous Planets OXP adds a custom texture to this planet.

The Galactic Supervisor for Galaxy One is based at Leesti Main station but also has a laboratory at the Leesti monitor station. (Xeptatl's Sword)

Stranger has produced two oxp's which illustrate the advanced graphics available from Oolite version 1.89. Leesti is Moon 8k & Leesti is Moon LSM 8k each map our Moon onto Leesti - LSM adds in markings for the Lunar Landing Sites!

Leesti is member of The Old Worlds.

Leesti features reasonably prominently in Imprint, the novel which came with some of the later versions of Classic Elite. Set circa 20 years before Oolite.

... At an orbital station bar: There was a TLK Leisure Pad in a pocket of the seat, and Rif scanned through the list of Station activities. The various descriptions of sports and pastimes on offer, and the accompanying prices, were an entertainment in themselves. As Rif sipped at his drink, which had lapsed into uneasy entropic equilibria, the house lighting dimmed and the lower level of the amphitheatre split and moved into three cleongridded dance floors. Holo-effects lit the grids with cries-crosses of flame as a lava-flow cascaded under the floors, and customers were invited to have fun at the scene of one of Leesti's premier tourist traps. "Show me your fluid dynamics", encouraged a voice over the speakers. The screen to the leisure pad flicked to an ad; "Now at the Turbulence. Set your lavalite". It beamed to nobody in particular from the table top.
... The lead item on Comm. was an incoming report of a skirmish above Alaxide, one of the Leesti system worlds where there was a mining operation and several construction plants. Several in-system haulers had been destroyed along the standard flight route. A pirate incursion from Riedquat was suspected. Local TLK outsiders and a viper unit had engaged the force but no more recent information was available. The bulletin analysis already laid the blame on the Knights Templars, a terrorist force across the galaxies which seemed far better organised in recent years and was committed to destabilizing GalCop. A mention in the analysis of growing tensions at the diplomatic convention between Galcop and the Interstellar Sanction implied, even to Rif's politically naive eye, that there could be a possible connection between the Sanction and the Templars (Chapter 6). The Interstellar Sanction are another federation of systems outside The Eight galaxies.