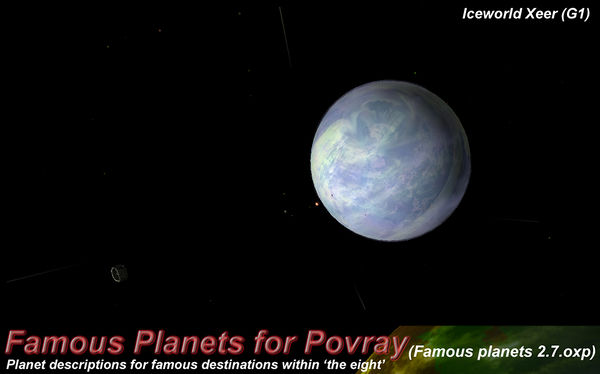 This OXP adds descriptive texts to the F7 screen. These expand on the original descriptions and include elements from Oolite fiction. This OXP works in tandem with the Povray Planets set that you can read all about in this thread. If you have the Povray planets set then you also SEE the original textures. This new version no longer includes the 40-odd textures (but Povray has 256 individual textures for every main planet in the galaxy!).

I hope you have fun with it. I'm glad it's released.

Note: this does not include any changes to the Vanilla game description of Lave (see Lave OXP for that). 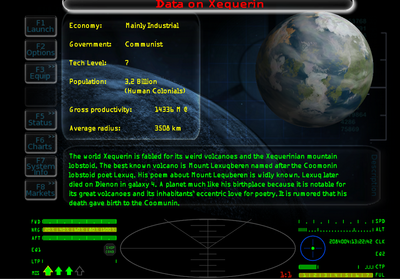 Download the original textures from here. One set for each galaxy. Note that there are two different renderings of the first galaxy, this link only gives the later version which is a different vintage from the other seven galaxies.

Adding depth to planets started with Murgh's Lave OXP & Diso OXP. Tianve OXP then followed with its Pulsar. There was also the Rough Guide providing a bit more lore for other planets.

PAGroove's Famous Planets was a massive attempt to add colour to every planet in the Galaxy, starting with his initial 10 and then expanding along Trade Route 1 to Tianve, to number around 40. He then added another 40 in Galaxy 2. By this stage, Famous Planets was a monster - over 300Mb, in the early days when it took yonks to download! Submersible then started his Povray Planets which provided high-res textures for every main planet in Galaxy 1 (and, eventually the other 7 galaxies too). PAGroove's Famous Planets textures were added to Povray, and this made the new OXP smaller, especially when the music was removed. This is what is now on the Expansions Manager.

User:Stranger has since produced his FPO (Famous Planets Overhaul) oxp's. They add another 60-odd textures to the mix and are massive. They are available through Roolite (or by bugging Stranger on the bulletin boards - he will take time to respond as he is in Russia! At the moment (Jan '23) there is no notice sent for pm's on the BB). But see FPO Lave & FPO Zaonce - which are on the BB.

Stranger is allegedly adding to his FPO. There is also the new alpha version of Life in the Frontier which should include some of the Famous Planets F7 screen descriptions in the on-station experience (Disembark and meet a feline from a sky-city in Zarece, for example)!

This oxp merely adds ambience and does not affect game play.