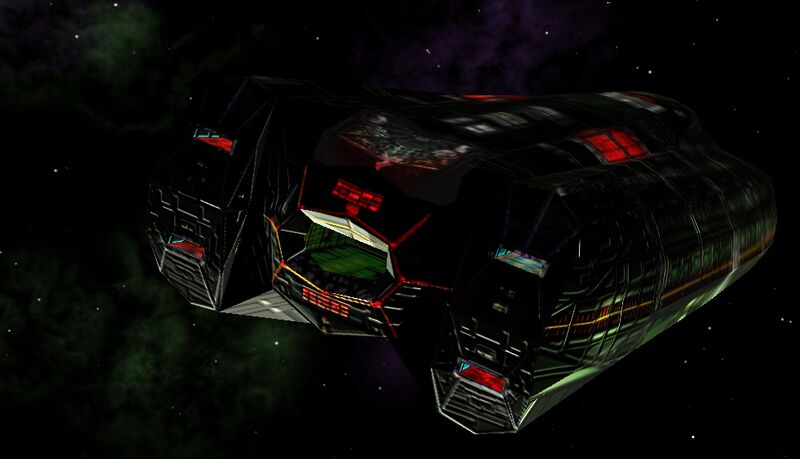 Liners adds huge cruise liners to the space-ways. These are enormous vessels, self-contained cities in space, with often tens of thousands of passengers on board. They will occasionally be found en-route to the planet, or in orbit around the planet close to the Main Station where passengers can enjoy the facilities of the GalCop stations and visit the planet below. Many of these ships have their own escort ships, shuttles and supply ships and these will often be seen ferrying passengers, crew and supplies from the station or the liner.

Some of the more famous cruise firms include Oocruise based in Xexedi and P&Oo Cruises who operate the Saga class liners. 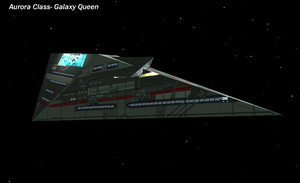 Overview
Rarely does the traveller in the Ooniverse have the chance to spot the mighty Aurora Megacruiser. But once spotted, never forgotten. With a length of 4.3 kilometres and about 800 meters in height it really is a mobile world capable of supporting 500,000 souls in a standard setting. Transportation takes place by high speed people/alien movers. You may be surprised to learn the Aurora does not support a public ship dock. This is because the dock masters of the Aurora want to know exactly who is on board. A trip on an Aurora is the trip of a lifetime: the waiting list for a place on one of the Ooniverse's 100 Aurora Megacruisers is almost 10 years.

It's a safe ship but it still can be nuked or Q-bombed so expect it to be escorted by quite a large fleet. But rest assured, in case of an emergency evacuation, a large lifeboat fleet can comfortably accommodate the richer passengers. Enjoy this ship while you can as the ship is going out of service because of the challenges of bringing the clients on board by pods (not featured in this OXP).

Facilities
On board the passengers are treated with a wealth of facilities. From shopping malls to hospitals, a public central park, botanic gardens and hotels. Passengers travel for more than a year on the ship and for the ultimate in luxury a Round the Ooniverse Cruise takes passengers to all the 8 galaxies.

Engines
4 GASEC SR-GDs (Space Rotary Galactic Drive) take the ship to 0.24 LM which is quite fast for such a large ship. 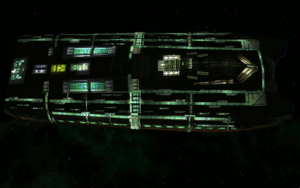 Overview
The Emerald is a luxury city in space and has all the facilities that you'd expect to serve the thousands of passengers on board.
The ship is served by its own fleet of shuttles, liners and runabouts to ferry passengers, crew and supplies around at the planets and stations visited.

Docking
Docking is from the front and is suitably suicidal for the uninitiated! Visiting commanders will find a market, quirium fuel on sale, etc. etc. 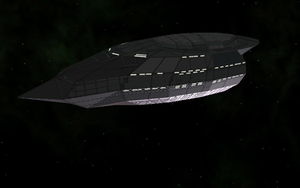 Overview
Moogul Shipyards Inc. based on Bearrabe (G6) presents the Tigershark. Without doubt, it is one of the most elegant liners in space. Within its 2.1 kilometres length it features all the luxury you would normally expect to find on a liner. Originally this liner was meant as a multiple role hull, like the Orisis. Although most of the Tigersharks are fitted as cruise ships some liners are fitted as office ships, hospital ships or even diplomatic centres. Due to an efficient partnership with both GASEC and the Aquarian Shipbuilding Corp this ship is encountered all over the eight.

Drives
The 2 special Propucel A2 Drives have the unique property that no exhaust plume is generated. This makes the drive more efficient and fast. Some commander in older ships cannot dock with the liner because it is too fast. The drive is capable of .28 LM.

Docking
Docking is from the back. After asking permission the ship slows down a bit so you can dock. For visiting commanders it even features an on-board trade port for trade and equipment. 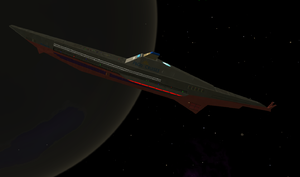 
Overview
The 'Saga' class cruise liners are operated by P&Oo Cruises, who specialise in luxury retirement cruises. These one and a half kilometer long vessels are luxuriously appointed and have all the facilities their demanding clients require.

They tend to operate in 'safer' systems as the elderly passengers are looking for quiet enjoyment of their cruise, and the ships will normally be accompanied by six Sidewinder-X escorts for added safety.

The staterooms are appointed up to five-star standards, and the ships have many quality restaurants, shops, cinemas and all the features a ship of this type would be expected to have.

One of the main features is the 'Concourse', a vast open atrium with several mezzanine decks, where you will find the shops and other public facilities. The 'Concourse' is topped by a vast plexiglass dome which has a viewing gallery aound it's base giving an incredible panoramic view above the ship. Often the liner will orientate itself so that, when in orbit around a planet, the planet can be seen 'hovering' above the ship. 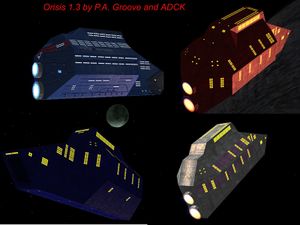 Overview
Orisis Class is GASECWorks' newest heavy industry frigate. It can be adapted to many roles due to its Flex-space. Interior depends on the customer. There are also Carrier variants for private contractors.

This OXP was made with contributions from Thargoid, P A Groove, Smivs and Griff. The base models for the Ferry, Sidewinder-X Escort and Lifeboat are by Aegidian, and the Saga Class liner model is by ADCK. Thanks also go to Commander McLane, PHKB and Eric Walch for help, advice and bugfixing. Texture addons by cbr.

Whilst initially for a new player without Docking Computers or ILS trying to dock with one of these can be suicidal, once docking has been solved, one can refuel or use the shipyard (at a premium). Hence the ratings to the right.