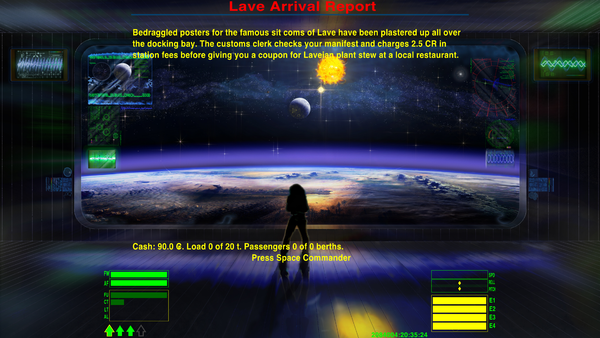 This is a minor OXP for Oolite-- it adds docking fees based on tech level to all GalCop stations (the fee is 1/2 the system's tech level, between 0.5₢ for a tech 1 to 7.5₢ at tech 15) as well as some colourful docking messages chosen at random.

Rock hermits and many OXP stations are also included, either as no-cost landing stations (they either offer limited services or poor trading) or in some cases costing more than the main station to dock.(Astrofactories/commie factories cost a bribe to dock with because of the cheaper equipment prices, casinos cost twice as much as the main station because they're luxury retreats, etc.)

I have attempted to include as many OXP stations as I could find, but the list is by no means complete due to the number of additional stations that are mission-created or in older OXPs. Thanks to additional station lists provided by Norby, I believe that all OXP stations that exist as of June 2015 have been at least accounted for (though not all have been given special messages or fees).

Note that in Classic Elite the The Space Traders Flight Training Manual stipulates that all taxes and fees are actually included in the market prices! This was also the logic in the early days of Oolite. Although exactly how this works when the buying and selling prices are identical, is a matter of some intrigue!

To add a unique docking message for a specific station use the following code:

"my_station_role" must be a role of the station in question.

Text in "message", and inside your descriptions.plist messageKey text, can include the following text inserts:

To disable docking fees for a particular station, use the following code:

Special thanks to Phkb for help understanding the structure of the message callbacks; my friend Eris (who does not play Oolite but knows her Javascript very well in-deed). Thanks to everyone on the Oolite forum who gave me scripting pointers. Thanks to Norby for the comprehensive list of OXP stations and additional suggestions.

Reworked logic to allow for new stations to be added into the system without recoding.
Code refactoring.

Fee script changed to exclude any station not specifically included in the script (random OXP stations will no longer have docking fees assigned). Many, many (and did I say many?) new stations have been added to the list, though most have only a generic docking message or none at all.

One additional docking message per tech level for a total of fifteen new messages!

Changes to script by phkb to add support for non-galcop stations.