GASEC (Galactic Astronautic and Space Exploration Center) is most famous for the Coriolis Space Station. The design work was performed in GASEC laboratories on the planet Vetitice. The first Coriolis station was in orbit around the world Lave in 2752.

The first operational Coriolis station was seen in orbit around Lave in 2752, presenting the uniform standard of GalCop space ports for years to come. Designed at the GASEC (Galactic Astronautic and Space Exploration Center) laboratories at Sector1/Vetitice (around which the semi-functional prototype still orbits) it represented a milestone in space habitat achievement. As previous, far more vulnerable old-school designs were proven surprisingly inferior, and the economic strength of the Galactic Co-operative flexed its new muscles, an unprecedented boom across the known galaxies saw Coriolis stations simultaneously constructed in massive numbers.

The Dodecahedron stations, commonly called Dodos, are now a common sight in high-tech systems. The first prototype of the basic GASEC model went into orbit around Leesti in 3141. At that moment the Leesti Coriolis was wiped out by the comet Hal 9001. Scientists luckily predicted this impact a few months before the event after a major asteroid storm in the region. The new Dodo model could withstand impacts for much longer but it remains unclear why the new station was placed exactly in the same risky spot (SPACE magazine claims budgetary reasons). The Dodo-station proved to be a success.

The Icosahedral station, or ‘Ico’, was introduced in 3137 as part of the GalCop galaxy wide upgrade. GASEC was again offered a contract to design the new prototype. The original design again offered some innovations over the DODO. It was now possible to park more ships in less space due to more efficient storage systems. So while externally ICO stations are about the same size of Coriolis and DODO stations it can store larger quantities of cargo and ships, planets often needed just one in orbit. 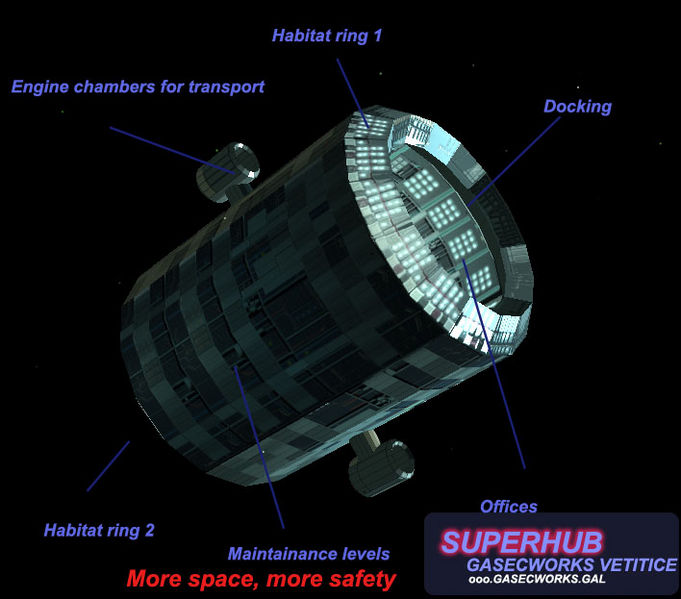 There are also Carrier variants for private contractors.

The Orisis Ferry is a large Megaship by GASECspaceliners. It is based on the basic Orisis hull. It is a large passenger carrier intended for longer distances and also for systems outside the spaceways.

Currently it is operated by Oo-Go which provides different trips and cruises along the 8 galaxies. The Orisis Carrier does not dock, it loads from within the Station Safety Zone.

The first testflight was a disaster. An asteroid that travelled through the Witchspace hole impacted the ship at Diso and the first ship was destroyed. (Read about it in DaddyHoggy's excellent story Lazarus). Later versions of the Orisis have some structural upgrades to prevent such disasters. Now the auto lifepod system ejects the passengers in case of disaster.