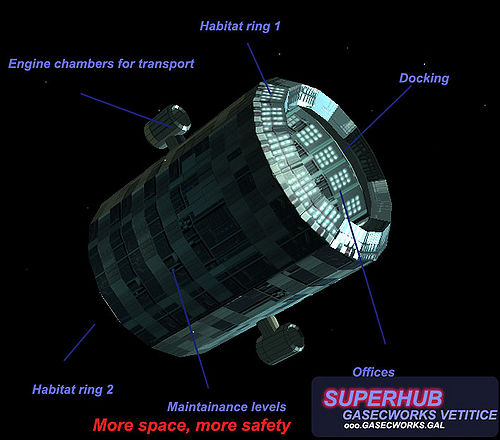 A major problem of the older stations was that docking was dangerous, especially for larger freighters. How many times have we have witnessed the sad sight of an exploding workers' commuter? The new superhub easily accommodates larger ships. Just fly into the blue orb and docking is taken care of. Once inside the orb the ship is transported via a mini-jump to the docking tube and shipyard.

added allegiance = "galcop" // this defines how npcs see the station in 1.79.
removed script = "superhub.js" // scipt.js did not have any ship script functions and superhub.js does not exist.
added station_roll = 0.1 // slows down the rotation making the station feel more massive. feel free to remove/tweak this, if it feels wrong.

Positioning with scrambledPseudoRandom, so it will be different from system so system, but will always be in the same place in a system.

Extract the Superhubv1.oxp into your Addons directory of Oolite. Just to be sure, start up Oolite with the SHIFT-key pressed until you see the spinning CobraMkIII.

This only works with the Additional Planets .oxp - not with Strangers World nor even the original System Redux which it was originally designed for. You will need to tweak it if you want to expand its functionality (try bugging people on the BB if you need help).

If you install this separate addon then Superhubs are built over some secondary planets also, in about every five systems as the main dock for big ships.

11% of additional planets will have a Superhub (4 of 36 station types).

There are 2 additional planets in a system in average so about 56 systems have a secondary Superhub in a galaxy.
Together with 10 Superhubs at main planets about every fourth system now contains a Superhub.
The chance of an extra Superhub is 8% if TL is below 10 (1 of 12 stations); and 12.5% from TL10 or higher (3 of 24 stations).