Collossal and majestic, Torus stations can be spotted at a great distance in space, and serve as a reminder that one is approaching the cream of technological advancement. Capable of containing vast resources and unorthodox space accomodation, they are usually lucrative centers of commerce.

The virgin Torus at Onrira

When the first Torus station was unveiled in orbit of Onrira in 3129, it marked an event of political promise. As GASEC and GalCop had relied heavily on the services of Obnoxicorp in both the political lobbying and execution of the project, there were many champions to claim honours and declare directions for the future, and some confusion could not be disguised.

As Onrira was at the time under a flawed Multi-Government system, caught up in the recurring Esonatoid calamity, there was solid cause to see the political instability resolved, especially considering the potential of the world's abundant resources. The Obnoxicorp strategy was intended to join the fragmented leadership in space, and shape a common prosperity through trade. The Torus station made this possible.

Early indications showed success as Onrira began to prosper, offering hope to similar systems who would benefit from a similar lift, but few of these figured in Obnoxicorp's elaborate plans. Torus stations began to appear on a galactic scale, but exclusively around planets of great commercial promise, and not where diplomatic efforts were needed. Although Galcop leadership were said to be displeased about the direction of the Torus program, any public acknowledgement of failure was suppressed. 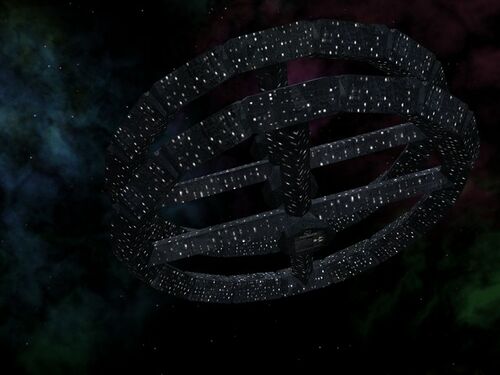 Although enormous in size, a Torus station is remarkably unproblematic to assemble compared to other space habitat. The prefabricated segments are transported with ease to the assembly site, where a Torus station is finalized according to specific needs and budget. Theoretically, there is no limit to the amount of rings a Torus can feature, though few have requested more than two. A single Torus supporting 8 times the population of a Coriolis and unique controlled segment facilities, corporate opportunity dwells at the very heart of the design.

Some years later Obnoxicorp Inc. has released a new and heavily modified version - the Tori2 - to counteract other companies designs and to reduce accidents with sleepy spaceship commanders crashing into this collossal structure, even though rumours say this attempt has failed completely.