The planet Onrira is famous for its Torus station. When the first Torus station was unveiled in orbit around Onrira in 3129 (eighteen years ago), it was an event full of political promise. Both GASEC and GalCop had relied heavily on the services of Obnoxicorp in both the political lobbying and execution of the project. At the time Onrira was an unstable multi-government system, but the Torus station helped unify the planet's inhabitants. It was a technological marvel at the time and Onrira became the first tech 14 planet in galaxy 1. (Famous Planets OXP)

Adds the famous Torus station to Onrira (and other systems too). 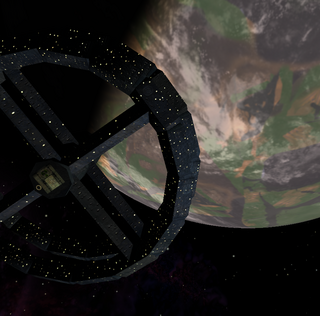 The Sidewinder is built here in the Onrira Orbital Shipyards by Spalder and Starblaze Inc. for Faulcon de Lacy. It was originally built to Navy specifications for a multi-purpose support craft and the ship began rolling off production lines over a hundred and fifty years ago.

The novella Status Quo by Drew Wagar mentions Onrira as the birthplace of James Feynman and as the location of a top secret Faulcon de Lacy research laboratory.