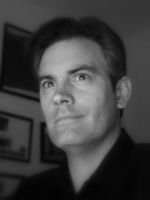 Drew Wagar is an author of Oolite stories.

Drew Wagar first played Classic Elite at age 13, a month after it was released on the BBC Model B. A friend (with rich parents) had received the game as a Christmas present. His most vivid recall is the wireframe presentation but with addition of a new technique - 'hidden line removal', making the objects appear solid, a remarkable achievement he had not seen before. Wagar played Elite mostly on a ZX Spectrum. He originally had a 16k model and bought the extra 32k mostly in order to play Elite. He genuinely reached Elite Rating after many months of playing, despite lensloks and the occasional "R: Tape Loading Error".

Somewhere in the open ended game play, the vast nature of the universe portrayed, the encouragement for the player to put their own imagination into the game and the novelisation that set the scene... he discovered the magic that is Elite. Drew considers that the game, combined with some of the TV and books of the time (Ulysses 31, Hitch Hikers Guide, Blakes 7 etc), was a perfect moment in time.

He was never too enamoured with computers in the 16 bit age, and pretty much ignored the Atari ST and Commodore Amiga. His next machine was a 386 SX PC. He enjoyed Frontier: Elite II. As an astronomy buff, the realistic physics was actually more fun to him. Drew considers FFE, however, to be a backwards step in many ways. In any case, neither FE2 nor FEE were 'Elite'. Elite didn't come back into his conscious thought until he came across "The New Kind" a few years ago. He was very disappointed that the Palm version of Elite was never released. Then on a search for an 'Elite' that would run on Linux he discovered Oolite early in 2006.

Inspired by the Oolite game, Wagar has written an Oolite novella named Status Quo. Status Quo was an attempt to provide a link between the back stories of Elite, Oolite and the later events of FE2/FFE, giving a newcomer to Oolite some information on how things differ from Elite in a narrative context, reminiscent of the original Elite novella, 'The Dark Wheel' by Robert Holdstock.

Drew has also written a small OXP for Oolite which features the Tianve Star System in the North East area of Galactic Chart One, where some of the action in Status Quo takes place. This OXP creates the features mentioned in the story and the player can thus go sightseeing. The Tianve OXP can be downloaded here.

Drew is married with two young sons, a dog and a feline lifeform from the planet Tianve.

It is reported that he spends most of his time on a rather backward planet called 'Earth', that he does not live in Essex, that he does not require any double glazing or a conservatory and disposes of unsolicited callers with a small plasma accelerator.