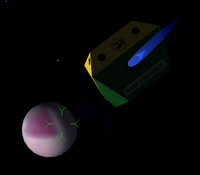 The Frog Space Rickshaw is the cheapest, easiest and unsafest transport to catch between stations, ships or anchorages. Though quite slow, they are agile, easily maneuvered shuttles, and a ride usually ends well. The widely known fact that only 'special people' will survive a long stay in a Frog, leads to less frequent patronage, but the constant consumer need for quick and inexpensive travel has made this fleet grown steadily since the day it began. It is speculated that you can probably catch a Space Rickshaw in every industrial system in the known galaxies.

At the time of the Frog's launch, there was great optimism as Khan Corp. promoted it as the answer to the increasing interstationary traffic congestion problems, and their candidate in the GalCop Open Shuttle Commission. Notably less expensive in manufacture and maintainance than all other models in competition, Khan Corp. felt confident they would win the coveted contract, and confidently produced it in massive numbers. Tragically, serious safety flaws beyond correction were discovered during early GalCop testing, and the model failed to make the competition's short list.

Faced with certain bankruptcy, Khan Corp. panicked to cut their losses, and one man took advantage of this to full extent. Jaswinder Singh never revealed his intentions as he took the whole fleet of unusually ugly shuttles that had been proven useless, off the hands of Khan Corp, and for the following two years, was the easy target of malicious jokes in the Onrira sector.

When Singh chose to re-emerge, and his concept was there for all to see, the venomous smiles stiffened. Having masterminded a vast, simultaneous franchise empire from within specific communities that shared an ancient lineage, Singh had suddenly produced a large industry that looked capable of rapidly expanding to galactic conglomerate scale, and apparently a vast supply of the unique type of pilots that could survive the unfavourable conditions of long-term exposure to the Frog.

Singh's descendants have in the generations since, never tampered with the original recipe of success, as the Space Rickshaw Co. has come to enjoy some galactic comic reknown due to the ship's unfavourable history, and their pilots, the Wallahs, usually peculiar social behaviour.

Since their training, and perhaps their extraction, make them uniquely suited to survive, and thrive, over long periods in a Frog, it is impossible to discard the Wallahs. Although public opinion smirks at the way they communicate, and the methods they use in conducting business negociations, it is commonly accepted that a Space Rickshaw Wallah is undoubtedly very brave, and must be gifted with special physical abilities. There is no route they dare not accept, and no evident dread of travelling through space in such a dangerous and vulnerable craft, as the Frog certainly is. This notoriety may have some cause to the fact that they are less frequent victims of piracy than one would think.

Very little is known about this special physical endowment when it comes to their unlikely Frog condition endurance, and when asked about it, Wallahs will insist it is simply on account of Yo-ga. There have been some radical scientific claims to support this baffling contention, but this is far from seriously considered among leading conventional scientists. As the Wallahs themselves are entirely indifferent to opinions outside their own communities, any proven explanation seems unlikely to emerge.

Those that have spent any time with a Wallah can attest to that they seem to be completely calm under extreme stress and crisis, and inversely, appear to endure endless boredom with inhuman ease. In either situation they are known to repeatedly murmur in a deep voice, the meaningless sound "omm".

Many Wallahs will, like the Space Rickshaw Co. founder, also bear the name Singh, but there need be no relation.