Once installed and engaged, ILS will steer the ship through docking, synchronizing its rotation the the station's if necessary. The commander should control the ship's speed and pay attention in case some other ship launches from the station as his/her ship approaches. The commander can even use Injectors at the early approach to dock faster, though it's prudent to reduce speed closer to the dock.

The ILS mark the current waypoint with a white flashing lightball which will approach the dock as the commander gets nearer to the station. The commander can temporary override the ILS steering (to avoid a collision with a launching ship, for example) but when the controls are released ILS will resume steering the ship to the waypoint again. 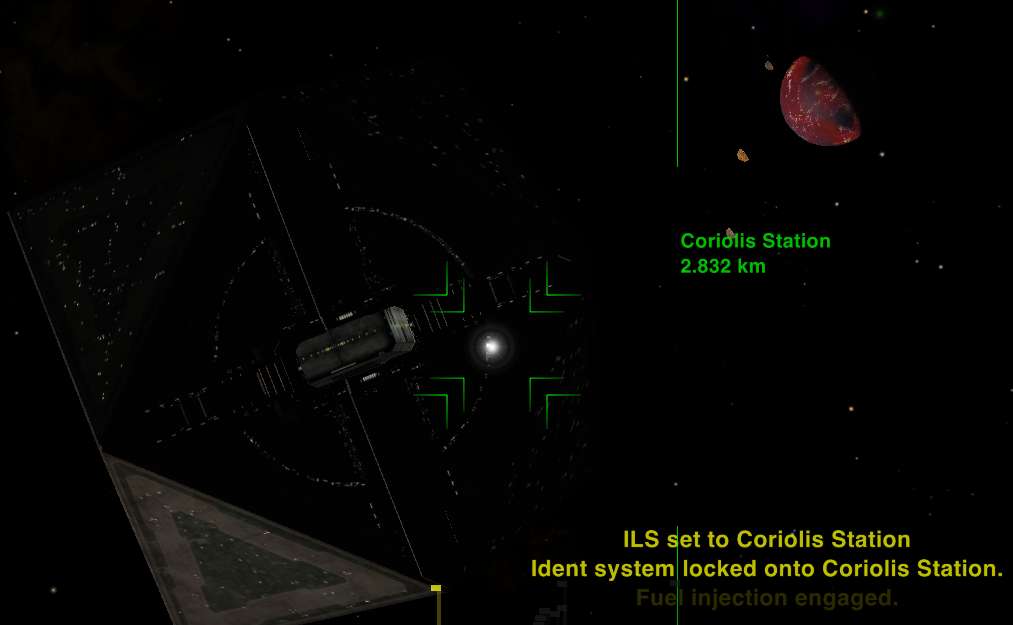 ILS engages automatically if all the following conditions apply:

Note that engaging automatically means there is NO on/off switch for ILS (though the commander can switch ILS off by unlocking the station). The commander can stop the ship by reducing thrust to zero though (to avoid a collision, for example).

The commander can avoid engaging ILS by using the missile targeting mode: use the "t" key instead of "r" to lock a station and ILS will not switch on.

ILS will rotate your ship in the last 2km if your ship is wider than the height of the dock.

ILS will even convince those stubborn Liners to stop while you are docking. Dredgers will stop as you ask for docking clearance...

NPC ships can dock much faster with ILS, using a shorter path and injectors, narrow ones without roll. This helps cure traffic jams near stations when you are waiting for landing clearance. You don't need to buy the ILS equipment yourself, just keep the .oxp installed and all the NPCs will use it! Injector-equipped ships will arrive in seconds, slowing down in the last 2km only. 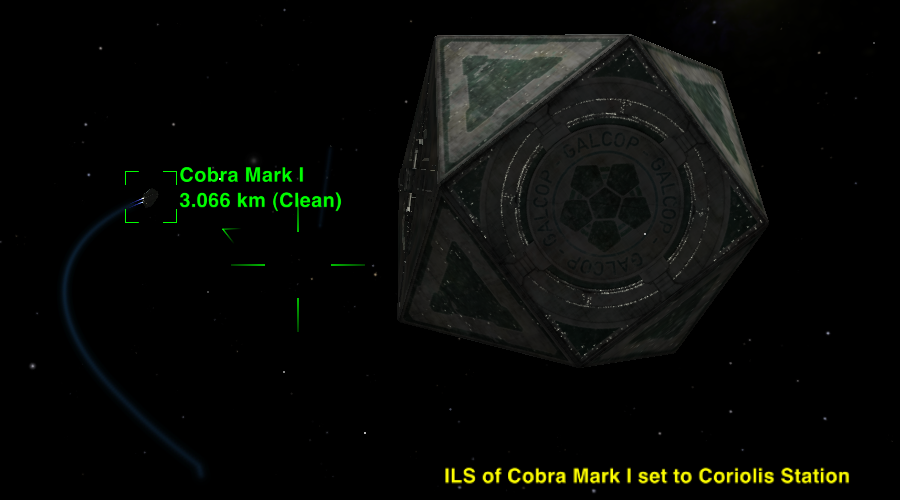 You must wait until the current ILS-user ship is docked before you can use ILS.

If you target the station while another ship is using ILS then you lock on the landing ship - a help to find where it is. If you keep the station in your crosshairs when the current ship arrives into the dock then you get the right to use ILS regardless of whether there are others in the queue.

Alternatively you can wait until all ships arrive into the dock - you cannot break off an already started ILS approach.

If you do not know what you are doing, this can be a very effective way of visiting St Giles in The Pool of Pellucid Placidity! Or losing cargo or damaging your craft! Note that as your shields improve (Shield Boosters & Military Shield Enhancement), the speed at which you can survive increases too! The most common issues are:

Advice: In such cases (and especially when approaching large moving objects such as Behemoths/Liners/Deep Space Dredgers) it is usually safest to detour around the object so that you can approach it from the side of the docking bay, thus limiting the gyrations required for the operation. If docking clearance protocols are not enabled (one of the F2 game options), then you can repeatedly press "L" which inhibits the objects own gyrations.

You might wish to consult How to tweak OXZ's