Rough Guide to the Ooniverse 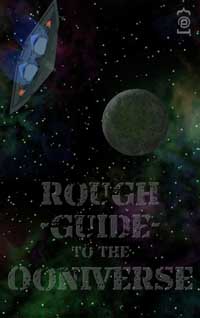 The Rough Guide to the Ooniverse

Rough Guide to the Ooniverse

Planets, eh? Who needs ’em? Big, massy, gassy things, and all that gravity’s just a drag... That’s what most spacers tend to think, anyway. But peek beneath those clouds, look beyond that one-line description in the Register of Worlds, and there are delights and surprises in store for anyone willing to go those extra few klicks from orbit to the surface! Let our team of Planetary Reviewers guide you through the highs and lows of the local volume, the sights, the smells, the sheer otherness of life on foreign worlds, under alien skies. So leave the ship in the loading bay, take a break, take a shuttle and come on down...

Currently only in the online version

We take you inside the starships that keep the Co-operative stitched together.

Nuggets from the BB

Matters have improved considerably here since the first edition of our Guide, when travel down to the planet was strictly forbidden, and intruders could be arrested - or worse! And when matters did start to liberalise, trade was forbidden on pain of a 35 year prison sentence, minimum!

Should you wish to visit a planet you must first obtain a visa from the appropriate authorities on the space station and either rent a shuttle craft, or a seat on one, according to your means. These can be quite expensive and charges are usually applied on a daily basis.

The alternative, is to equip your spacecraft with Planetfall equipment. You will need to have already installed both Docking Computers (to interface with the Landing Site authorities) and External Heat Shielding (to combat the friction of the atmosphere). The planetary landing module includes many of the necessary licenses for such activities.

The standard galactic currency is the credit and is accepted throughout all GalCop registered planets. All purchases (equipment, transport, consumables, stock etc.) will be conducted in credits [See GalCop Directive 3123-3127 for further details]. Some planets may trade with currency other than the credit. Be warned that this done at the trader's discretion.

In a galaxy as diverse and varied as ours it is next to impossible to list all the delightful dishes and drinks you may come across. However, the Lavian Tree Grub and Lavian Chardonnay come highly recommended. With regards to the Lavian wine always ensure that you ask for white chardonnay as opposed to the red variety. These two drinks are poles apart! Other foods to lookout for are Thrumpberry flavoured items and deep fried trumble (The Ontiat system is probably the best for BBQ trumble - try it for yourself).

Most ship-to-shore communications are conducted via the Holo-fac facility and all space faring vessels are equiped with this communications unit. As long as you have a name, home planet and valid ID reference code for the person you wish to contact the Holo-fac facility can be used for an unlimited time with no cost to the user. [For further details of how GalComm can provide this service at no charge to you then it is advisable to read the GalComm enquiry of 3002]

Occasional news items may be broadcast direct to the ship, but large scale galactic news may be reduced due to bandwidth proximities and com regulations. It is advisable, therefore, that all travellers and star pilots who wish to communicate with each other do so via Broadcast Communications Networks.

In a universe as diverse as ours a full range of sports and entertainments would take up several thousand volumes. However, there are some interesting diversions that are worth noting.

Firstly, Zero-G hockey, the galactic sport is currently enjoying it's 150th Galactic championship. Here, the top 32 systems "battle" it out to see who can lift the coveted Galactic Cup. Systems have to enter a "world" team (made up of the best players in their system) for qualification. This prestigious tournament, held every four years, is the number one event and this year, Zaonce have qualified for the first time in over 70 years. Zero-G has a long and fascinating history and it is well worth checking out Zero-G: The Definitive Guide - Past, Present and Future 44th Edition, Published by Trantor House, Lave

As well as Zero-G hockey there are literally hundreds of sports available to watch and participate in. Of particular note is the growth of rugby. Once this was a popular sport on old Earth but had declined to the point of extinction. Now, a consortium of businessmen (names, unfortunately, withheld from publication) are pumping millions of credits into this ancient sport. In just a few short years this sport has grown in popularity. If you get a chance attend a game and witness one of the sports of yesteryear.

As well as sports there are a variety of outposts you can visit and relax in. In some systems you'll find the HoOpy Casinos. Once regarded as a bit of harmless fun, now they are a multi-billion credit industry and the premium outlet for all your gambling needs.

This species deserves special mention as out of the millions of different species that populate the universe the Trumble is one of the most well known. Often seen as a pest and pet in equal measure these small creatures have a habit of infesting living space if not looked after in the correct manner. Although there are many galactic myths about the Trumbles (breeding continuously is one) the space traveller would be advised to check their facts with reliable sources. Trumbles require specific diets and all reputable traders will inform you of how to keep them and how to maintain a healthy lifestyle of the for animal.

In recent years there has been a lot of Trumble baiting and Trumble Turning (a pilot stocks up on Trumbles and flies out to the nearest star...well you can guess the results). Despite being edible a number of protest groups have started to voice their concerns. Indeed, there have been reports of some Trumble rights activists attacking trade ships and sellers of these unusual animals.

What to do in an Emergency

It is vital that you ensure that your newly purchased vessle comes with a Remlok mask. All dealerships in space faring vessels a required by GalCop law to provide one AT NO EXTRA COST [GalCop Directive 420].

Should you find yourself in the unfortunate position of being stranded in the hard vacuum without a ship, escape capsule or a space suit then the Remlok mask is essential. Protecting your vital organs the Remlok device shields you from the void by InsPlas plasFibre coating. The advanced communications devices secured within the visiplate broadcast SOS signals through 40 channels, shifting wavelength within each channel four times a second.