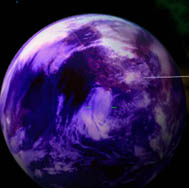 “Tianve is most noted for its famous pulsar, the top tourist attraction in the North East quadrant. Visiting by an official liner is recommended, but rental vessels are available as a cheaper option. Zero-Gee Cricket is banned on Tianve at the request of the native feline population. Tianve is also home to the Elite Combateer 'Rebecca Weston', and details on Tianve's most famous resident can be found in the Tionisla Chronicle publications - 'Status Quo' and 'Mutabilis').”

Tourists that make the trip down to the surface are handed special suits and anti-radiation capsules. However after they've taken the necessary precautions they often are stunned by the beauty. The atmosphere colors the landscape in an eerie but beautiful blue. 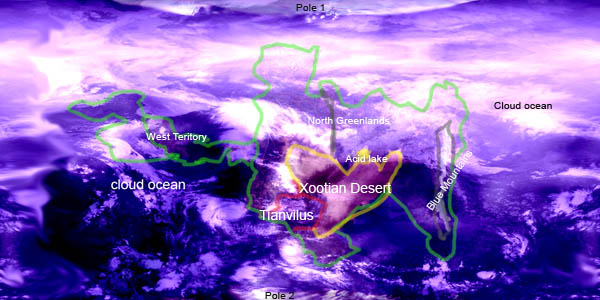 Tianvilus is the main city that is mostly under a shielded glass dome for protection. Under this glass ceiling the visitor is delighted to find some ancient temples devoted to the Pulsargod Tiaxus. It is believed that Tiaxus must be brought sacrifices to extend the time before he repeats his infamous 'Sunrage'. Non-religious people simply call the 'Sunrage' a Sun or pulsar storm. This time of high radiation activity happens once every 50 years or so but cannot be accurately predicted. In the eye of the non-religious inhabitant the worship of Tiaxus is basically a waste of time.

The Xootian Desert is a growing desert. This desert starts directly at the East side of Tanvilus. One of the other reasons for Tianvilus to be under a glass dome are the Xootian sandstorms that would otherwise blow directly into the city causing all sorts of inconveniences. The Xootian desert is a harsh environment but has beautiful dunes. In the North East part of the planet the famous Acid Lake can be found. This Lake has a diameter of 1500 km and is the largest acid lake on the planet. The acid boils up from beneath the surface and is caused by volcanic activity in combination with radiation that is reacting with substances in the lava from Tianve. This results in a almost blinding yellow inland sea.

The Blue mountains are a 18000 km long mountain range with peaks up to 10 km. Some of the most challenging peaks of galaxy 1 can be found here including the famous Mt. Alioth.

The Cloud Ocean covers most of the planets surface. The deep blue water is believed to be home to some massive sea creatures. The Tianve Snakefish for example can reach a length of 250 meter. As long as a large spacecruiser.