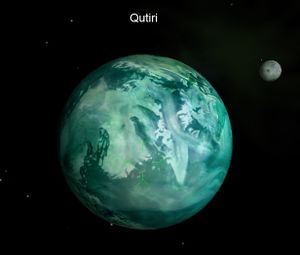 “Qutiri offers space travelers a sight to behold. Magnificent mountain ranges and enormous glaciers cover the planet. Climate is cold but drinking Lethal brandy in the Bleu Ice caves of the Capital Qitroomax or climbing Mount Tironos under a bright cold night sky are things that you will never forget. The yellow felines of Qutiri have adapted their skin to the cold climate ”

There are some dozen or so large countries on Qutiri. While they rarely wage war on each other, they do not tend to see eye-to-eye on very much, and thus do not supplement the police patrols in the heavens above. The most interesting are probably the rather small Bishopric of the Straits, the Empire of Rrowthiessa and the Republic of Maar.

The bishopric of the straits does indeed cover a modest geographic area, but attracts pilgrims from far and wide. As part of the Church of the Holy Witchspace Guard it is the home of the famed Straits Seminary whose students (who also come from far and wide!) have won renown as debaters and hair-splitters par excellence. Indeed, many have, on quitting Qutiri, and on losing the edge of their religious fervour, become famous as attorneys throughout the Eight. Their debating competitions are justly famed, and tickets to them can be had for a reasonable sum. The Grand Cathedral is known throughout the Church. Made of an ice which sparkles in the sunrise with a lustrous hue, it contains the shrine of Saint Sudionarru who was put to death by the Dynasts of Tarradon for refusing to pay homage to their bizarre deities. His catafalque is located to the right of the main entrance, and is embellished with pink granite. The structural integrity of the cathedral is protected against earthquakes by a skeleton of transparent fibres running through the walls. Unlike most of the rest of the Qutirian states, the bishopric is not the seat of heavy industry, but rather a devout bastion of the faith. 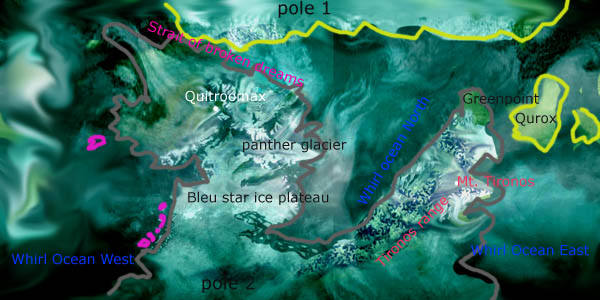 The empire (one of three on the surface of the planet) is also known outside the system - for its musical genius. Emperor Proerow III was enamoured of the zither and set up the Conservatoire of Tironos (just north of the mountain's foothills) to burnish excellence in its playing. The academy has provided several Zither maestri, and its midnight open-air performances have won wide acclaim from the fur-wrapped afficionados who come to admire the expertise of the players. The small workshop in the grounds of the conservatoire is best avoided - problems with supply of decent woods have eternally plagued it since its inception, and the quality of the product has always been compromised accordingly.

The imperial capital, Browiea, is just to the west of the conservatoire, between it and the Imperial Spaceport. The palace has a mosaic facade (in a state of constant repair) which displays the historic victories of the Rrowthiessan Dragoons over their various enemies. The techniques are still taught at the local military academy, but seem to have little application outside Qutiri. As well as the concert halls, the Green Groves of Ssri are of interest to the casual visitor. The setting, with lines of trees fading into the distance with Mount Tironos looming over the statues of the old emperors, has a certain haunting beauty. Local purveyors of warmed wines walk the pathways, selling their wares, and occasional dramas can be seen in the sunken rubberised amphitheatre in the centre of the grounds (warming cushions can be hired for the performance).

The Browwn university of Browiea is of great historic importance. When the felines of Reorte settled Qutiri some one and a half thousand years ago, they needed to adapt to the local clime. Whilst the then Browwn faculty of technology did wonders in terms of compensating for the temperature (and the colonisers came ready equipped with a certain attitude towards earthquakes!), it was Professor Pryaan of the faculty of genetic excellence who developed the necessary tweaks to enable full adaptation to be made, although this involved the fur turning from black to yellow. The refusal on the part of some to do this led to the first major secessions from the ancient confederal seat of power at Qitroomax, and contributed considerably to the quibbling character of Qutiri politics.

There is a famous epic saga describing Groiilior the Black, who as the last of her clutch to retain the colder black coat of ancestral Reorte, was abhorred by her parents and siblings, and eventually fled into the mountain wastes wrapped in her minks, and encountered all sorts of blood-stirring adventures as she climbed up and down the glaciers, camouflaged in her white-green furs. Even today parents warn their cubs to behave or risk being attacked by the invisible black cat of the icy wastes.

The Republic of Maar is an aristocracy. Only the blue bloods get to vote for the Overlord, who rules with the advice of the Bishop of the Straits, just to the north. The capital, Owrosstos, was riven by an earthquake half a millennium ago, and the city has since developed on either side of the rift itself, making its way down into the depths. Crossed at regular intervals by swaying rope-bridges, the local aristocrats maintain palaces hewn into the rift walls, with elaborate entrance halls lined with statues and sculptures, sourced from all over the Eight. Almost all are open to visitors for a consideration (paid to the under-butler): both the Blue Palace and the Obsidian Manse are particularly lavish.

The Capital Qitroomax is located within the Republic, but maintains a separate identity. The historic meeting place of the squabbling states which constitute the so-called confederacy, their incessant quarreling not only has prevented any serious development of the site, but has also inhibited GalCop from classifying Qutiri as a true confederacy. Qitroomax is really a slum-town, and their vaunted Grand Council House is quite dilapidated.

The Seminary of the Heavens in the Bishopric of the Straits (not the Seminary of the Straits mentioned above, but one of several others) has some very expensive guest suites for visiting dignitaries. Not only is the setting quite unique, but access can be had to the sacred observatory with its golden orreries, platinum telescopes, and ornate wall and floor maps. A very nice setting for elevenses, it must be said. The chapel also is rather unique - and the student choirs maintain a constant paean of praise to the Primordial Principles.

To continue the musical motif, the Hotel of the Harmonies in Browniea is situated directly opposite the conservatoire. The hotel has access to several of the boxes in the concert halls and there is either an unaccompanied zitherist or a quintet playing daily in the hotel lobby from lunchtime onwards. The cocktail bar is most pleasant - the crystal chandeliers which are quite spectacular were sourced in the local mountain range. The carvings of the florettes are a good example of Fin-de-Siecle Ochre Imperial style.

The Mansion of Blethisna in Owrosstos is not actually in the rift, but on the northern side of town, surrounded by conifer groves. Once the winter hunting palace of an earlier overlord, it has been restored and equipped with every conceivable modern aide to comfort and enjoyment. The restaurant is famous and patronised by many of the local aristocracy. Do try the marinaded Qutirian Trumble - quite unlike the Trumble on the stick which is so popular on Lave. And the sommelier maintains a most excellent cellar, as one would expect.

The Pits in Owrosstos are at the other end of the hospitality spectrum. At the bottom of the rift, with detritus falling down from the upper levels, the pits are nevertheless quite secure seismically speaking. Some of the patrons are quite uncouth, and one should not be found in a state of inebriation during one's stay as calamitous consequences may well ensue. Several of the wall carvings are said to date back to the time of settlement, but they are hardly to be regarded as works of art.

While on Qutiri, it would be a great shame not to avail of the range of roasted meats on offer. Many are marinaded - as attested to by the trumble mentioned above. The range of sauces is quite staggering, a rainbow of hues with variegated flavours to match. Avoid blue - the piquancy of the spices is not for non-Qutiri palates. Your wine waiter will be able to advise on the most suitable beverages.

There are three 'musts' while you are on-planet. The first are the blue ice-caves just east of Qitroomax. While the scintillating social soirees of yore are a thing of the past, the caves still retain a certain grandeur. The central cave has been equipped with a modern bar and to drink Lethal Brandy surrounded by the shimmering sapphire stalactites is atmospheric to say the least.

If you are in the Empire, and staying in the capital, one can hire an ornithopter to take one up the slopes of Mount Tironos for a jaunt. Guides can be hired for a reasonable sum, and some of the walks are very spectacular, especially when the Borealis is evident. The weaving walls of translucent folds have caused many a poet to swoon.

Shopping for duelling pistols is the final 'must'. These intricate works of craft are made of precious metals and enamelled by highly valued craftscats (you will see exactly how highly valued if you enquire as to the price!). While almost all are designed for feline paws, a few have been crafted for other species. The better showrooms contain shooting ranges where one can practise one's markcatship.

Shooting is a popular sport - especially duelling with waxen bullets. Special face masks are often worn to prevent damage to the eyes, but the "True Toms" deign to lower themselves in this regard.

Bob-sleighing is also popular, and there are several mountain slopes with runs of great renown - the southern side of Mount Tironos for example.

There have been attempts to cultivate interest in mud-hockey, but sadly the mud keeps on freezing over, somewhat spoiling the spectacle.

Earthquakes are the major hazard, and some parts of the planet are particularly prone. Many hotels have one or more shelters which can be reached within three minutes of the room's front door. While nowhere near as dire as the situation on Reorte, the preponderance of mountains and glaciers can make tremors much more damaging. Still, local architecture has evolved with the peril very much in mind, and extensive damage such as that causing the Owrosstosian rift is quite rare.

This planet is featured in Famous Planets OXP