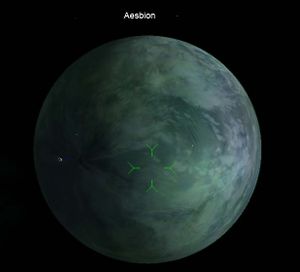 "The planet Aesbion is cursed by dreadful civil war."

Regardless of how he feels about GalCop when he's being chased by a blue-light-flashing Viper while carrying a full cargo hold of Benulobiweed, deep down in his heart the average spacer has at least a grudging respect for the system because it /works/. The Galactic Cooperative of Worlds polices the spaceways and provides neutral markets where spacers can trade without being hassled by planet-bound authorities (for which we all should be thankful; heaven /knows/ that GalCop regulations are hassle enough...), in exchange for which they let the local administrations--or lack thereof--run the planets however they see fit. While this setup isn't perfect, it does make traveling among the stars considerably safer. Only very rarely has GalCop ever needed to directly intervene in the affairs of its member planets, but when it does, it brings its full strength to bear, as the example of Aesbion clearly demonstrates.

In 2921, Aesbion sent a trade delegation the neighboring world of Aronar. During the negotiations, the High Lords of Aronar were rather gruff about what they saw as an attempt at exploitation, taking a very confrontational stance to many points in the agreement and occasionally threatening to suspend talks outright. Unfortunately, the delegation saw these as grave insults and returned home to report to their superiors. The Aesbionians, enraged by the treatment of their fellows, immediately raised a small fleet and raided the system, causing considerable damage to Aronar's capital to avenge the insult. When word of the incident reached the local Sector Command, GalCop justice was swift and severe; the Galactic Navy dispatched a task force to the system, easily obliterated Aesbion's makeshift navy, and arrested, tried, and executed for treason the entire Board of Directors as well as a number of lower-level administrators and any survivors of the battle they could lay their hands on.

In addition to serving as a powerful object lesson to anyone considering defying GalCop's charter to preserve peace between the planets, the Aesbion Incident also brought about the common stereotype of Aesbionians as short-tempered neurotic psychopaths. In fact, nothing could be further from the truth; the incident arose because the Aesbionians believed that the High Lords of Aronar had breached their code of honor, a grave insult in Aesbionian culture, and that repaying them in kind was the only way to prevent themselves and Aesbion itself from falling into disgrace. The Aesbionians place a high value on honor, believing that all relationships bring about "debts" of honor in some way or another. Should you decide to visit Aesbion, keep in mind these simple rules of hospitality: Always be courteous to your host, don't be overly belligerent, and be careful what you joke about. Don't worry yourself too much, of course--your host will probably expect and tolerate a little bit of coarseness from an off-planet visitor--but exercise discretion.

As far as sightseeing goes, most of the main attractions are centered around the capital and primary city of Shisoli. Those with a passion for history might wish to visit the Exalted City, a relic of the planet's Imperial era. The entire complex was both home and workplace for the God-Emperor and his staff, many of whom lived and died without ever setting foot outside its walls. A must-see for any visitor, a few miles outside the city proper, lies the Cathedral of Winds. Situated atop a cliff by the coast to take full advantage of the local wind patterns, the Cathedral is built with a number of funnels to catch the winds outside and run them through an enormous organ inside, producing a neverending, always-changing, haunting melody; it is especially popular during the region's storm season. Those lucky enough to arrive during the local new year will be able to take part in the annual Carnival of Fools, a celebration where the strict rules of personal honor are flung aside with reckless abandon and the population throws itself into a whole week of concerts, performances, drinking binges, and general hedonistic revelling.

However, a word of warning: Be careful to watch out for signs of "honor duels" taking place. These can range in scale anywhere from one-on-one tests of personal skill to full-scale warfare between two corporate branches (the latter giving rise to the typically-overstated Register entry). While most conflicts generally have a third-party overseer present who makes sure the proper rules of conduct are carried out and that deaths of innocents are kept to a minimum, this is one of those situations where their relaxation of the rules for outsiders will work against you, not for you. As you're not likely to have any friends or family come to claim a hefty compensation for your death or injury, approach areas beset by conflict at your own risk. 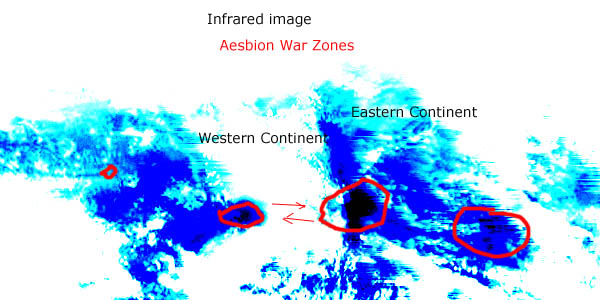