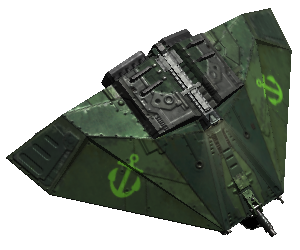 Cobra Mark III. The name alone is evocative. One of the most deadly of serpents from old Earth (or so they say), with its distinctive hood-like shape, Cowell & MgRath's finest is an engineering marvel.

You want speed? It's got you covered. At 0.35 LM the Mk. III can shift like nobody's business and leave most fighters in its considerable wake.

You want cargo? No problem. A standard 20TC capacity that can be extended to 35 TC makes it a serviceable freighter. It might not ship as much as the Pythons of this galaxy but with its superior speed and manoeuvrability it'll get there quicker and likely with less repair costs.

How about firepower? Fore, aft, port, starboard, the Mk. III is ready for whatever you can afford. Granted, the stock pulse laser doesn't appear to live up to the rest of the ship but that speed and cargo capacity means that a pilot will soon be in the market for an upgrade. Until then, four missile pylons are not to be sniffed at and make an affordable defence before a pilot can afford an ECM system.

Sounds great so far, but will it be let down by its generators? Again, and somewhat amazingly, the answer is no, it won't. Four energy banks may not be outstanding for a vessel of this size (and it's bigger than you might think) but combined with such a high recharge rate they really are formidable. Being expandable with an extra energy unit means recovery from incoming fire can be impressive.

So what we have here is a ship that appears to score well in all departments. Not only can it be employed in any role, be it fighter, miner, trader, courier, passenger transport or scavenger, but it can also excel in all of them. For a lone pilot it's hard to wish for a better ship and once you look at the price you'll likely be convinced that there isn't a better purchase.

Critics will points to the bare-bones equipment installed (or more accurately 'not installed') in the 'off the line' models but what the Mark III grants you is potential. It has the ability to install almost every piece of equipment that you might find along with the generators to power them. You need to see the Mk. III as an investment and the only way you're going to get one so cheap is to have it be but a shadow of what it could become.

Like the jack-of-all-trades that it is, it doesn't typically arrive all neat and tidy. Every pocket has either been filled or assigned to accommodate all kinds of kit and utility. Repairs on a fully equipped vessel are jobs assigned to low ranking mechanics whenever possible on account of the work that has to be done just to access the relevant areas. Only reluctantly will one of the senior engineers take on such a task and then strictly when it's for a piece of tech that an apprentice couldn't be trusted with.

Many will complain that it takes an age to load and unload, that the fuel scoop is exposed to impact damage or that the cockpit becomes cramped when all the navigation enhancements are installed. But your typical Cobra pilot just doesn't care. This ship's dressed for survival, in any environment and under any circumstance, not for a parade or dinner party. If you want luxury, install a passenger cabin; it's got room for quite a few of those by the way...

Maybe that's why so many Mk. III pilots are 'lone-wolf' types. Sure, the cockpit has two seats but most only have one occupant. Who wants a co-pilot in a cramped cockpit anyway (or at least in a fully specc'd one)?

For your typical Mk. III owner it's a case of their partner being their ship, and that partner offering all they could ever need. An all-rounder that can in many cases compete with more specialised vessels, this is a choice for the more cunning of pilots, those who can see its potential and are prepared to bide their time until their seemingly fast but otherwise unimpressive cargo hauler becomes truly formidable.

When a Cobra Mk. III shows up on your scanner, perhaps more so than for any other ship, you'd better be ready for anything and precisely because there's a good chance they will be.