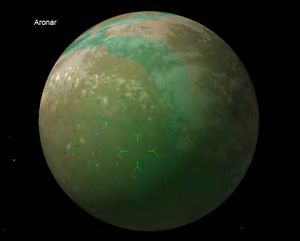 The Jungle world of Aronar. The most dangerous passage on the Spaceway L1 to Lerelace. The landscape is dominated by a jungle covered supercontinent. Deep in the woods the Aronar Deadly Goat has its habitat. They are deadly because of their size. 2 times as large as normal goats. Every village on Aronar houses a local HoOpy Casino. Gambling is a religion on Aronar. Every citizen of Aronar gambles before dinner

"Aronar is most famous for the Aronarian deadly goat and its hoopy casinos."

The planet of Aronar is home to one of the most unusual cultures in the Ooniverse. On the one hand, the people are very conservative and spiritual, believing for the most part in the Fundamental Tenets of the Word of Giles, including the admonitions against excess material wealth. On the other hand, the entire planet seems to suffer from a collective compulsive gambling habit. Casinos, gambling halls, race courses and tournament fields seem to be on every street corner, and passions for the hobby run so deep that two Aronarians will often make casual bets on such matters as which of two raindrops will reach the bottom windowpane first. The casual observer is often left standing in wonder how these two seemingly contradictory facets of society can exist in harmony. The secret lies in a peculiar idea known locally as "the Wheel of Fortune."

The Wheel of Fortune's basic principle is that the souls of all sentient beings are part of a great cosmic wheel that turns according to the will of Giles. As it turns, a soul's fortune will rise and fall according to its place on the wheel; as life goes on, one is subjected to a continuous cycle of rising and falling fortune. As a result, any fortunes won as a result of chance are seen as perfectly legitimate; if it was not Giles's will that the winner should be so fortunate, he would not have won. Of course, this extends to other areas of life as well; disappointments and failures are seen as only temporary, while Aronarians are not overly proud of today's accomplishment when they may be swept away by a downturn of fortune tomorrow. On the whole, this gives them a rather phlegmatic outlook on life. However, it also gives them a certain contempt for traders and merchants, whom they feel are trying to defy the cycle by always seeking profit at any expense. This has caused some friction with many spacefaring peoples, particularly with their vitriolic neighbors on Aesbion.

While most traders will be able to satisfy their entertainment needs at any of the the local gambling halls (where, appropriately enough, the roulette wheel dominates), those with more discerning tastes are encouraged to investigate one of the aristocratic lodges. Generally visitors from the outside are received hospitably, and even with some curiosity - unlike on some worlds, most people have little opportunity for day-to-day contact with pilots. The local lord will undoubtedly throw a sumptuous (and, most important of all, expense-free) feast during your visit, complete with the best food and drink in his stocks and entertainment provided by a local band or a traveling actors' troupe. He may also throw an impromptu tournament, inviting you to compete against the best pilots of his house in various competitions, which will of course attract plenty of interest (and money) from the locals. (Be careful - although space duels are only supposed to last until one party yields, accidents do happen.) The entire point of all this extravagance, of course, is to impress you into swearing fealty to the lord's house as an exclusive pilot. You may be tempted - house pilots are granted considerable privileges, including the lord's protection - but you are under no obligation to accept, no matter how good the local alcohol is, and the lord will sometimes (begrudgingly) allow himself to be bargained down to a much more open contract if the price is right. Being a member or close ally of an aristocratic house often brings benefits, but it can also attract some unwelcome attention from jealous rivals; although open warfare has thankfully gone out of style on Aronar, the nobility still wage petty "shadow conflicts" against one another, and being too close to a particular house or too good at your job may make you an ideal target for a little dash of poison in your next meal or being smothered by a well-paid chambermaid in your sleep. Your friends probably won't miss you too much, either - after all, that's how the wheel turns.

While you're visiting the countryside, be on the lookout for the famed Aronarian deadly goat. They shouldn't be too difficult to spot - they're about half again as tall as an average human being and usually kitted out with garish purple and sky-blue fleeces. Males also sport large curved horns, which they often use to settle arguments over territory or females - naturally, these clashes give yet another outlet for bored Aronarians to press their luck. Despite the name, the deadly goats tend to be quite docile unless provoked, although they do get noticeably agitated during the local mating season. Should you somehow manage to get on the receiving end of a goat charge, the best thing to do is to run away as quickly as you possibly can; a charging male can easily kill a full-grown human (or any number of other sentients), while even concentrated blaster fire has difficulty penetrating their tough skulls. Thankfully, deadly goats tend to exhaust themselves pretty quickly when charging at full speed, so as long as you're in decent shape you should be able to outrun one. While large flocks do still roam in the wild (particularly in the south, where a shaggier breed prevails against the colder temperatures), most have been domesticated and are found in the pastures surrounding the lodges.

Also note that, aside from the feasts, taverns and gambling halls, you should try to be on your best behavior while planetside. The people of Aronar tend to be somewhat old-fashioned about vice and draconian in their punishments. Giles alone can help you if you are caught in a particularly criminal or scandalous act, although the locals will help you arrange a personal meeting to straighten things out. All in all, you'll stay out of jeopardy if you keep yourself on a tight leash, show (or fake) the proper respect to the right people, and don't make too many of the wrong sort of enemies. 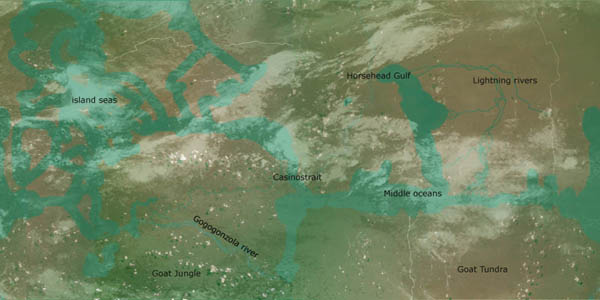