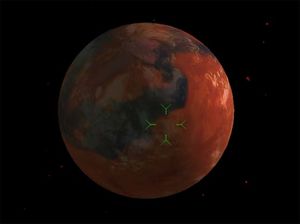 " Everyone knows the saying: Red like the hells of Isence. Everything is Red on Isence. Isence was in Quarantine for many years. The deadly Isencian V bacteria turned the humanoids red and fat. It is now clear that the disease only activates if you live for more than 5 years on the planet. Nowadays an expensive medicine exists to keep the disease under control. This allowed the now famous Chexsin Cherzin to take part in the Four-Way Pellery championship on Isinor."

Jollity often accompanies a certain 'stoutness', shall we say? The Isencians very much relish their comedies and their comedians. Their 'red humour' has proved to be a valuable export, as the infectiousness of their humour is rivalled only by the infectiousness of their ... Well. Enough said. Their febrile gubernatorial system is, in particular, a frequent butt of their jokes.

Unusually, the different governments of Icense are not differentiated geographically, but by the genes of the peoples they represent. So while the Djerbitians form the majority in the city of Ondaluse, the Dharinist Dynarchs represent only them, and not the other inhabitants. They also command the Djerbitians on the continent of Syreni, despite their being so heavily outnumbered by the Murasidi and Vangoruthi peoples. Needless to say, when a humanoid of Djerbiti engages another of the Murasidi in a marital contest, the loyalty of their progeny becomes a matter of dispute. Quite ridiculous. Very messy. And a wonderful source of Icensean jokes. This is only enhanced by the different customary methods of joining the group - with the Djerbitians, a Djerbiti father means that the child is Djerbiti. But with the Vangoruthi, the mother's status is the determinant. As for the Murasidi, one becomes a member at the age of sixteen during the ceremony of allegiance - however murky one's parentage. The Loquavirthi insist on a genetic sampling performed during gestation. Et cetera, et cetera.

There do seem to be marked differences of character between the various genetic groupings (which of course only increases the humour generated at their expense). The largest group (in number and size) would be the Vangoruthi. Renowned for their bulk, their equanimity and their enjoyment of Zero-gravity hockey, their political leaders, the Vangorian Senate, try to take the initiative when it comes to dealing with the other peoples. Sadly, their entrenched suspicions of the Vangoruthi render most such discussions moot. Next in significance are the Djerbitians. Whilst slightly fewer in number than the Murasidi, their control of the coasts and rivers of the Eastern continent (the water is in great demands for the factories), gives them greater sway in determining systemic decisions (on the rare occasions that such are reached). The Djerbitians are esteemed for their practicality, their thrift, and their preference for canine pets. Some of the most significant composers were Djerbitian. The Dynarchs thus seem to have more influence than their Vangoruthi rivals. Et cetera.

The language is complex and hierarchical. The conjugation of the verb changes depending on who one is - and whom one is addressing. There are similar complications regarding the declension of nouns which is hinted at here in the different utilization of Icensian/Icensean/Icansiean terminology. Vocalization of an inappropriate conjugation can cause confusion, insult or even a riot depending on circumstance. For this reason, many find it most expedient to employ an interpreter. Icensean humourists tend to find all this rather less funny - but outworlders with a decent drink in their hands/paws/claws often have a different view.

The city of Vorhusith contains the governments of three of the peoples - the Murasidi, the Boxrhanili and the Loquavirthi. The Murasidi houses of parliament are an unimpressive dump. Their more interesting precursor was destroyed in the Lithium riots, a century ago. But, the domes of the Boxrhanili House of Champions is justly famed - lacquered in greenish gold and with enamelled copper plaques bearing the names of the genetic forerunners, it looms over the district of the River Tree and contains delightful tea-houses which are well worth a visit - one can not only sip at the delicate beverages, but can also witness first-hand the machinations of the Boxrhanili political classes in their wheeling and dealing. Similarly, the Halls of the Hierarchs of the Loquavirthi are well worth admiring from afar. Entry to aliens is punishable with heavy fines, but the delicate rose-hued marble walls, chased with filigree gold hieroglyphs have to be seen to be believed. The scars on the walls from the Lithium riots presage some interesting stories. Hucksters offering guidance around the site and interpretation of the hieroglyphs abound, some are even worth the money. 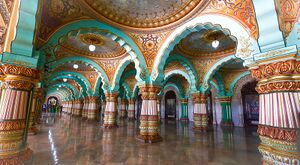 Foyer of the Mansions of the Magenta Mandibles

Warning: Some peculiar property of the Isencean waters inhibits duplication of the experience off-planet. Do not be fooled by charlatans trying to sell you quantities of the product for export. Those who have invested in such expensive luxuries have always lost heavily, whilst enriching the locals greatly in the process.

The shopping district of River Tree is justly famed. Named after a large Borthug-tree which had extended for 2 vershts along the southern side of the river Strengon, the promenades along the riverside are backed by the facades of a display of shops which equals those to be found anywhere in the Eight. The results of the inhibitions of travel caused by the Isenceian infection can be seen in the display of foreign goods for the home-bound peoples. Luxuries are imported from all over the Galaxy and sold here. Do not fail to visit the Elite Emporium of Garstang. The clothing section has become renowned for its ability to cater to most species with off-the-peg appurtenances which are ready to wear (the rumour is that it is sponsored by Garstang's government (the Murasidi) to tempt space-faring species down to the planet's surface). And the food halls have been justly acclaimed as possessed of a richesse of choice unmatched within many light years.

The humourists of Isence display their talents in the comedy clubs. While one can indeed purchase a ticket and spend an evening sampling the local flavour, it may be found more expedient to do so from the safety of one's hotel room whilst watching proceedings on the local holo-net. The locals are not always as diligent as they could be regarding their personal hygiene and wearing a nose-mask can be understood as offensive. If, on the other hand, you are fortunate enough to the invited to a private comedic evening show - accept with alacrity!

It is well said that the only way to make a small fortune at the Isencian casinos, is to visit them with a large fortune. The rooms themselves are glamorous, festooned with all sorts of fineries and the finest of fine art - paintings, mirrors, wall hangings, etc. The attendants are courteous (drawn from the bankrupted members of the local ruling classes) and solicitous. The ambience is magnificent with billowing clouds of incense dispensed by thurible-swinging attendants and a constant stream of waiters laden with groaning salvers of wines and savoury snacks. But all this must be paid for. And you, gentle visitor, are one of those who gets to do the paying! The rules for the various games of chance on offer are phenomenal in their complexity. Not only must one master the skills needed to make the better choices in the games, but the ability to avail of an option - and the experience to understand when that option is appropriate - are matters which take years to master. One or two of the games may seem simple but .... And if you see Chexsin Cherzin at the gaming tables, watch with interest - but do not take part!

At the time of writing this guide, the Murasidi had just decided to build a national stadium in Vorhusith to allow their teams to compete with each other in grandiose style. This will be the first such on the planet.

A popular activity amongst families. Parents take their children up the mountains and point out local flora and fauna, and the sights of interest in the nearest city. Some impressive bridges have been constructed over the ravines to enable the trekkers to walk safely whilst admiring their surroundings. The views can be quite stunning.