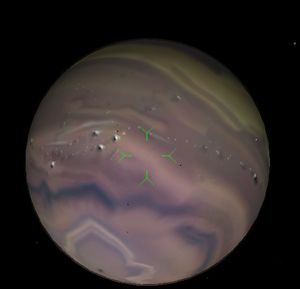 "Zarece was the first conolized gas planet ever. Colonized by felines of Reorte who became fed up with the constant Earthquakes on their home planet. With a combination of Zero-G technology and modern balloons large orbital cities were created that float in the higher layers of the atmosphere. Zarece consists of superdense gasses not yet fully understood."

The conolization of Zarece was performed by the refugees from Reorte with the technological help of the lizards of Tionisla. Conolization should not be confused with colonization, a quite different process. Zarece, uniquely, enjoyed both. Nineteen large orbital cities were built, of a size enabling the cultivation of the jungles where the agricultural foodstuffs are produced and the furs hunted. These orbitals each drag several agricultural "floats" behind them, as they waft over the superdense gaseous "seas".

It has been argued by some of the savants of the University of Murraor that these superdense gases are not strictly gaseous, that they should rather be termed as plasma - that peculiar state which is liminal between gas and liquid and exists only at certain temperatures and pressures. No matter. What really counts is this: the ways in which the light of the sun is refracted through the lower levels is quite phenomenal - the nights on Zarece have to be seen to be believed. The shimmering coruscations of the colours, with sparkling motes and shimmering bands. The nightime cities with their tall, sparkling, slender towers and their lambent lower regions are legendarily spectacular.

This has proven to be inspirational for those of a poetic bent, and many of the local denizens engage in regular family poetry readings in their homes. Needless to say, Zarece has become a place of pilgrimage for feline poets, artists and those working in the imaginatory crafts. Imbibulation of appropriate intoxicants, followed by a sunset visit trip through the "ocean" to witness the views of an orbital city from a distance, have enabled many a feline to enter a trance-like state conducive to the alliterative allusions necessary for the production of poetic hyperbole.

Sadly, this is only true for those with cat's eyes. Other species, with less impressionable eyeballs, find they can see little of these supposed splendours, and the emotional burblings and unending recitals of the inhabitants become quite insufferable in no time at all. Tedious, in fact. Listening to the felines ooh and aah over dark, murky and dismal roilings of muck-tinted sludge has been likened to the joys of listening to a Happy Eye preacher in the fourth hour of his ecstatic sermonification.

Each city is quite independent of the others, hence the confederate nature of the government. In the past, this led inevitably to strife, and indeed, of the original nineteen cities only fifteen now remain (and seven of those were recolonized after their inhabitants were annihilated in battle). The others, sabotaged and riven by warfare and treachery, sank into the depths and, needless to say, have provided even more fuel to felines of artistic temperament. If one makes one's way to the southern pole, the edge of lost Khrawow can be seen in the murky depths when the sunlight is at the right angle. The Romance of Qleo, the princess of sunken Khrawow and her doomed love affair with the Syndic of Basrir have acted as the catalyst for many an opera, symphony and ballad - especially in feline circles. Again, you need to be a cat to see anything in any of this.

Braathnir, the largest city is home to the University of Murraor, a renowned haven of feline poetic analysis and also of botanic research. The medical school has developed a rare expertise in treating mange and fur diseases, and exports its experts throughout the feline worlds - and some of the rodent planets too. Braathnir also contains the Hall of Heralds, containing effigies of the various historic ambassadors of the floating cities from their more bellicose days. This is proudly shown to all visiting dignitaries and is on the guided tours. Again, if one is not a feline oneself, the experience can be rather ... tedious?

The city of Owmrah has a small colony of lobstoids who have been living there for several decades. Sent thither by the Witchspace Lobster itself, they preach to those around with gusto and enthusiasm, brandishing placards and declaiming with gay abandon from their podia in the marketplaces. Some of the local poets have written epics about the encounter between the fervent lobsters and the disinterested natives (but see below). One of Owmrah's tributary floats contains several stands of walnut trees whose wood is exported to the Aegidian Woodworks laboratory on Xexedi when problems with the Bemearan supply occur.

There are of course many smaller towns, which pay allegiance to the larger cities, dotted hither and thither about the planet. These are of less interest (if such a thing is possible!), but some contain small groups of crafts-cats with great expertise in such matters as wood-turning, dyeing, the creation by hand of stringed musical instruments and lastly games-board manufacturing (mostly from wood). The famous furs are not used much locally, but are very significant as an export good.

If you have the money - and the time to spare, you might wish to consider hiring an artisan's room in one of the smaller towns. Run as small business by the locals, and dedicated to excellence, local cuisine, and sumptuary accomodation, these dwellings are highly individual and independent of the grasping conglomerates. You will probably find yourself in a suite with a six-poster bath, surrounded by hand-carved furniture and hand-crafted gee-gaws. The meals are an introduction to the very best of feline gastronomy, and if you have the interest you can enjoy bespoke masterclasses in the local craftshops.

On the other hand, if your timing is right (ie you arrive during the university vacations) you can rent a room in the student halls for a moderate sum. Central to all the major "attractions", you should be able to saunter everywhere in your city centre with ease and assurance.

Do you enjoy catnip? If not, you will find it difficult to find many dishes that you can tolerate (unless you are lucky with your chef!). The local liquers, on the other hand, have much to offer. Sadly, they seem not to travel well, but the local versions of Thrumpberry brandy contains redolences which the more usual varieties eschew. There are also two local varieties of rum which are worth savouring: Thristian's Dark Surprise and Qleo's Elixer of Eternity. The last should be sipped sparingly, as otherwise the more delicate flavours will escape the palate.

If you do not have cats' eyes, avoid the temptations of taking a ride through the roiling grime to gape at the murky rays reflected far beneath, however much your guide cajoles you. And keep away from the Hall of Heralds unless you have enough feline friends to enable you to distinguish between them - or you enjoy a penchant for staring at dozens of identical statues.

On the other hand, the Librarial Stacks of the University of Murraor on Braathnir do have something of interest to offer. Their high-vaulted hallways with carved wooden balconies clinging precariously to the walls and filled with dozens of students researching recondite assignments and conferring feverishly on matters of academic import is a sight of some interest. If you are lucky, you may even spot one take down and open one of the ancient tomes lining the shelves! And if you are really lucky, you might even see the student read it! The radiators were designed by Creecha (one of the historic Professors of Design) and assume a circular shape, sticking up from the floor like a sort of pustulent boil bristling with flanges. Some of the displayed volumes have gilt edges painted with landscapes (seascapes?) of the historic cities of Zarece, which can only be discerned on the fore-edge if the spine of the book is twisted to splay the pages.

Likewise, the marketplaces of Owmrah can be most entertaining on the occasion of a riot, when the lobstoids can be seen hurtling through the streets clutching their banners and pendants with a screeching mob of cats on their heels, demanding redress for scandalous assertions and callous disregard for local mores.

Beware pickpockets! Theft has burgeoned since the last edition of our guide, and one really must take care now when walking through city streets and crowded areas.