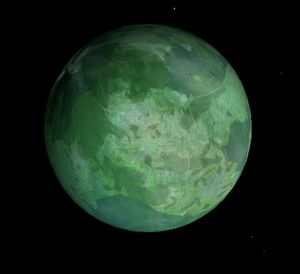 "Reinen: a farmers' planet in true tradition. The visitor even can see the crops from outer space. Natural resources are now exhausted and therefore Reinen nowadays specialises in biotechnology. They sell all sorts of farming equipment and therefore the planet now rates as an average agricultural. The capital city New Boorlin hosts the yearly Galaxy 1 Beerfesten which attracts drinkers from all over the universe."

"This planet is a tedious little planet."

Reinen is yet another one of those planets with an undeserved reputation for being "tedious" thanks in part to the Galactic Catalogue. Certainly your typical native of Reinen (or Reinlander) can be quite grave and humorless when there is work to be done; however, few planets truly know how to unwind quite like Reinen does, and to those in the know, the great Neu BOorlin Bierfest is one of the most prestigious events in the Great Eight.

The Bierfest is an old tradition that goes back to the original colonists' roots on faraway Earth. It is held over the course of two weeks in the harvest season and features such attractions as carnival rides, local folk music, tasty traditional cuisine, and, of course, copious amounts of Reinenian Quuma-Beer. Though it lacks the alcoholic kick of much harder liquors popular elsewhere, it is commonly acclaimed by gourmets one of the smoothest and tastiest beverages in the Galaxy, consistently appearing in Top Ten Beverage lists compiled by great gastronomic and culinary experts from across space and attracting gourmet pilgrims from as far afield as Tianve to the festival. Quuma-Beer is one of Reinen's most lucrative exports, though most of the stock tends to be quickly bought up at a scandalous discount by nearby Xexedi for resale in its own high-price restaurants or consumption in exclusive executive drinking clubs.

The Bierfest is only one aspect (though certainly the most well-known) of Reinen's agrarian culture. The planet has little heavy industry - the vast majority of its few mineral resources have been largely stripped away to fuel the booming industries of Xexedi and Lerelace - and most manufactured goods are either imports or products built strictly for the domestic market by regional craft guilds. Most of Reinen's surface is given over to farmland, which mostly grows a variety of staple crops (including the quumatriticale grain used in Quuma Beer). The common Reinlander stereotype is one of an independent, small-time freeholder; though a significant portion of the land is now in the hands of corporations and the regional governments, the majority is still owned by individuals or family farms, and having a plot to call one's own is still a dream for many (though fewer than in previous generations). Reinlanders are also notably very civic-minded; indeed, the term "Reinlander" itself is more one of convenience than allegiance, as most natives self-identify with their Land (province) or Kanton (township) before the planet itself. The planet is technically governed by a loose confederation of all the Lands; however, each Land is given broad leeway in making its own laws and regulations so long as they do not violate the Charter of Confederation. It's probably better to think of the Reinen Confederacy as an alliance or an economic association than as a government per se.

In general, life on Reinen is fairly relaxed compared to that on many other worlds of the Ooniverse. The locals are friendly, the beer is good, and the days go by at a leisurely pace. Perhaps for those used to a fast-paced life of adventure, Reinen is indeed "a tedious little planet"; however, for the veteran spacer looking for somewhere to retire, or at least a place to cool his heels, the planet is an ideal stopping point.